There is a nagging suspicion in my mind that the impetus to abandon our grievances came from these nefarious sources. I can’t prove it – no one can, but I am suspicious. Scotland has some pretty fantastic grievances, some pretty emotive and powerful grievances. It just strikes me that not to deploy them in an independence debate – that had absolutely everything to do with history – was such a monstrous tactical blunder that it couldn’t have originated with a real independence supporter.

In 2014 we saw ourselves as a small nation in a David-versus-Goliath fight. Realistically, in the beginning we did not expect to win. One theme repeated frequently at the time was that we just wanted to be a nuisance, that we wanted to have a bit of craic, upset the apple cart, and maybe – if we got lucky – give the English political establishment a bloody nose. We saw ourselves as a pesky younger sibling trying to make a point. But something changed. At some point in August 2014 it dawned on us that we might win – that we had a real shot of securing independence.

What Hassan is doing, in effect, is imposing the political division he would prefer to see realised – the class division. There are those with education who know what they are doing because of where they were born into in society – “the more pragmatic,” and then there are those who are emotive, driven by passion and blind faith in a charismatic leader. This is why I have described his comment as both superior and sneering. Hassan’s “philosophical” gripe is that the movement appears to have transcended his class-based assumption...

“Hope over Fear” is a nice wee slogan. It looks fantastic on t-shirts and bright posters and banners, but it’s a slogan. It’s only a slogan. It has long since dawned on us that we need a shed load more than Hope if we are going to face down and defeat the British state. Winning independence will take grit, resilience, perseverance, and hard graft. Independence is a whole world of steely dedication and bloody hard work.

As this not unlikely scenario plays out Scotland will find itself in much the same position that Catalonia now finds itself – having to break British law or hold a referendum without British consent in order to decide on its own future. We may imagine that the deployment of the police against the independence movement is impossible here, but when it comes to state politics and the political and economic necessities of suzerain states anything is possible. Over the past three centuries the British state has consistently used force against its own subjects to keep them in line.

When it comes to campaigning some fights are unavoidable, and it’s inevitable that we’ll gravitate towards others of a similar political outlook as ourselves. Cliques and factions in the movement are a natural consequence of being a movement so large. There’s not very much we can do about these fall outs, and so long as we are still working towards the same goal we can deal with the difficulties that arise as a result. But the other stuff is unnecessary and causes us more trouble than it’s worth.

It is certainly no secret that the BBC is no friend of Scottish democracy. During the 2014 independence referendum campaign the behaviour of the state broadcaster in its negatively biased coverage of Yes Scotland became so transparently toxic a mass public movement sprang up in response.

Our 2015 stroke of luck was reversed and the political map has normalised. That is all. Yet the effect of the apparent electoral shift – which is just an illusion – has caused us to wobble, and it looks, if the navel-gazing on social media is anything to go by, as though our wee independence locomotive has stalled. 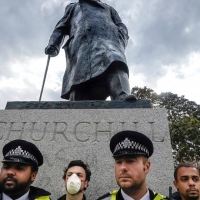