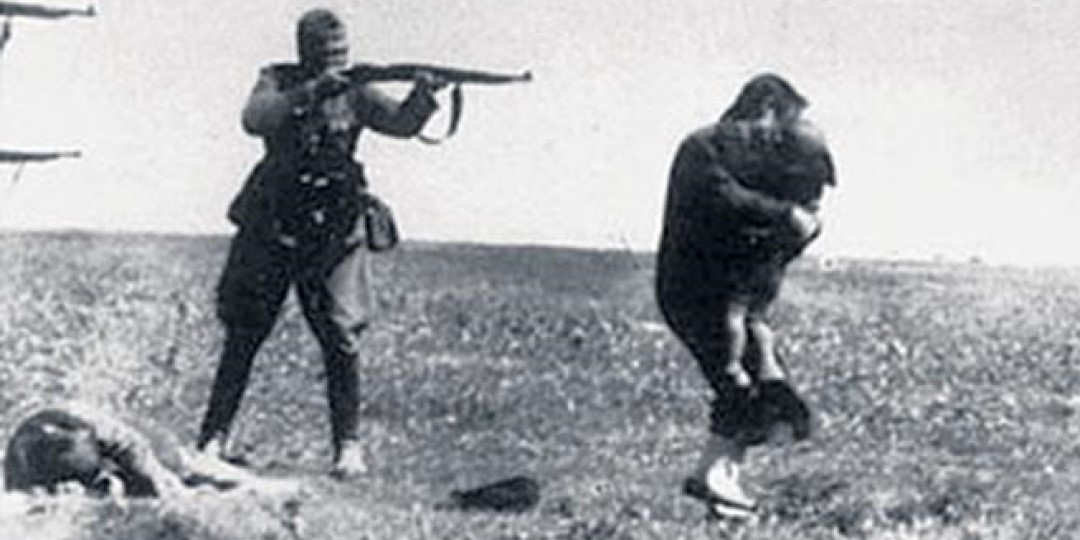 Where Does Darkness Begin?

WE ARE FAR ENOUGH REMOVED from the horrors of the first half of the twentieth century for the lessons of those dark chapters of our history to have been shelved on the dusty shelves of the academy. The savagery and industrial brutality of trench warfare have been boiled down into easily consumed symbolic silhouettes for the cynical use of governments hoping to stir up nationalist passions by the glorification of war. The victory over Nazism, fascism, and the Japanese Empire, in a global conflict that resulted in the deaths of some seventy-five million people, has been transformed into a fraudulent nostalgia engineered to intoxicate tabloid readers with false memories of Spitfires and so dupe them into swallowing the pathetic xenophobic rhetoric of the establishment. And the Holocaust? Who really knows anything about the Shoah anymore?

Almost a decade ago, before being awarded an academic fellowship in History, I taught a course on the Holocaust which led to the publication of a paper, The Mechanics of Murder: the systematic murder of Hungarian Jews at Auschwitz-Birkenau (McCann, 2012). In researching the events of just eight weeks in 1944, all the time it took for the Nazi death machine to ‘liquidate’ the entire Jewish population of Hungary (the murder of almost half a million human beings), I found myself in a profoundly dark emotional and psychological place. This short dissertation was written through one of the most debilitating periods of depression I have ever suffered.

'In order to understand why and how "the other" was constructed, it is important to look at nationalism, the main "… twitter.com/i/web/status/1…

How can someone produce a dispassionate and clinical account of what happened at KZ Auschwitz from May to July 1944 — the most intensive period of killing in the history of this infamous extermination centre — without breaking down? Here we are confronted with and challenged by the heartless rejection of Hungarian Jews by their Hungarian neighbours, the ruthless efficiency of the Third Reich’s rail schedules and the logistics of transporting human ‘cargo’ to its destruction, the use of medical doctors to select on arrival those who will be worked to death and those who will die immediately, the presence of ambulances marked with a red cross to ferry the elderly and disabled to the gas chambers, the screams of hundreds of petrified people as they choke on cyanide fumes, and the incineration of babies in the arms of their naked mothers.

In Beyond Good and Evil (1886) the German philosopher Friedrich Nietzsche presciently wrote: ‘If you gaze long into an abyss, the abyss also gazes into you.’ The Holocaust — the Shoah — was an abyss. It was the Abyss, and the more one looks into it the more one comes to appreciate that it had an intelligence all of its own. This immolation of humanity was not the work of one person or one group of people. There was nothing inevitable about the mass murder of the Jews of Europe. At various points in its nightmarish evolution the will to murder operated over people, over a country, over a continent as though it had a mind of its own. The Nazis themselves did not at first imagine where their virulent antisemitism and their ideology of racial supremacy would take them. They confiscated Jewish people’s property and expelled them, they toyed with the idea of sending them to Madagascar, drew up plans for resettling them over the eastern frontier of their expansion into Russia. From the beginning of the Holocaust, for sure, the solution to their imagined ‘Jewish problem’ was to get rid of them. In itself this was murderous, but the terrifying scale of the murder — the genocide, the ‘Final Solution’ of complete annihilation was not part of the original plan. It was not inevitable.

Yet, somewhere in the utter mayhem of Operation Barbarossa (22 June — 5 November 1941) and in the cold psychotic calculation of the Wannsee Conference (20 January 1942) the total destruction of European Jewry became the answer. It became a national priority.

One stands, then, on the ramp at Auschwitz in the summer of 1944, figuratively — and at the moment in history through which all subsequent history must be viewed, dismayed, and asks: How did we get here? When did this begin? When did we cross the line over which there is no turning back? When did the events themselves take control over the people instigating them? While the Holocaust was not inevitable; not in the strictest sense, there is a process or a series of processes leading all the way from the defeat of Germany in the Great War to the arrival of the SS Einsatzgruppen death squads into the shtetlach of Ukraine and western Russia which have within them a sinister logic that leads almost irresistibly to a grim inevitability — the Holocaust, the Khurbn Eyrope, the Shoah.

Historians, philosophers, and theologians will be forever puzzled by the genesis of this catastrophe: At what point did one of the world’s most civilised and cultured nations cross the Rubicon, when did the Holocaust in all its awfulness become inevitable? There is no easy answer to this. Was it when the National Socialists came to power in January 1933? Was it the invasion of Poland (1 September 1939)? Was it during Barbarossa or at Babi Yar (29-30 September 1941)? There is no definitive answer to this question and we may never know. But if there is an answer it is to be found in the question itself: This happened in Germany and in territories occupied by Germany, one of the most civilised and cultured nations in the world. If this could happen in Germany, it could happen anywhere.

The question and our efforts to answer it reveal something unsettling; that civilisation and culture provide only the most fragile layer of defence against the encroachment of terrible darkness. This thin veil of security and freedom and rights is held in place by the flimsiest of pegs — intellectual and political freedom, respect and civility, and tolerance and the rule of law. When any one or a number of these pegs are compromised, weakened, or removed the structural integrity of the whole system that guarantees our safety and security is damaged, and this darkness — Καος, the will to power and destruction, the darkest angel of our nature — is an active force always searching for a way in. The moment it becomes acceptable in a civilised and cultured society for a minority to be victimised, dehumanised, demonised, or scapegoated — ‘othered’ — by the majority, then we have sent out an invitation to the darkness — we have opened the door. Every display of ‘man’s inhumanity to man’ begins with this invitation to the darkness. Ultimately, so long as this process of othering is part of our civilisation and culture — as it always is — some holocaust is already latent, possibly even nascent.

Why Did the Holocaust Happen?

5 thoughts on “Where Does Darkness Begin?”