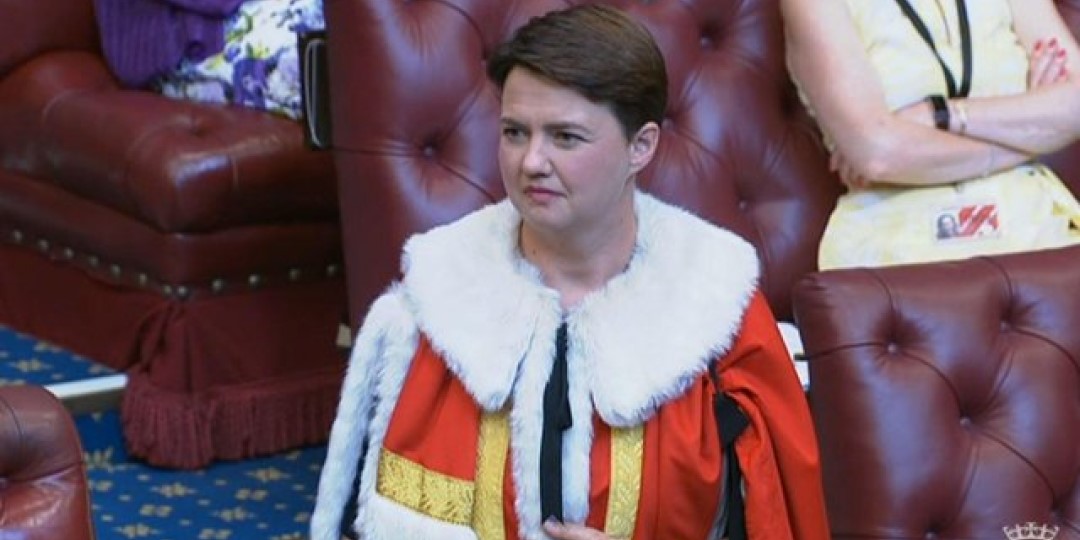 Lording It Over Us

WHAT DOES IT MATTER that Ruth Davidson has been introduced in ermine to the House of Lords in Westminster? As the leader of the unionist Conservative Party in Scotland she failed to win a single election, as a defender of the union she failed to maintain a majority for the current constitutional arrangement, and as a dyed-in-the-wool loyalist she has failed to preserve Scotland’s affection for the English monarchy. Ruth ‘rape clause’ Davidson has been rewarded for her efforts for Britain, a Britain — like it or not — Scottish people voted to remain in chains to in 2014.

This is how loyalism in Britain works. It does not need you to love it, want it, care for it. The super-rich British establishment has all the power because it has all the money. Democracy has no control over it because it controls democracy; it owns or has massive influence over the media instruments which ‘inform’ democracy, and so can rest assured nothing will change that it doesn’t want to change. And when it wins, as it always will, it will rub its triumph in your face. It doesn’t need you to like it. All that is required of you is that you know your place.

When are we going to realise that the British system is like quicksand? The more we struggle, the deeper we sink, the more stuck we become.

Only this morning the BBC in Scotland, the principle weapon of the union in our country, was attacking the Edinburgh administration (let’s stop calling it a government — it’s a devolved British administration) over affordable housing. The unionists don’t give a shit about affordable houses for the kinds of people who need ‘affordable’ houses. Unionism is the prevailing political ideology of the wealthy British establishment, a ruling elite which depends on our poverty to safeguard its own wealth and power and privilege. The only reason the BBC was up in arms about affordable houses was to distract us from the shit-show that London’s decision to lift all restrictions has become.

Right now, all over Scotland, supermarket shelves are bare because trade has been seriously and irreparably disrupted with Europe. London’s xenophobic immigration polcies have ensured a critical lack of [low paid] foreign workers, the very people who have traditionally done the dirty, dangerous, and dehumanising jobs that keep our economy ticking. Farm labourers have gone. Fruit pickers have gone. Truck drivers have gone. What did we think was going to happen?

In Scotland, as over the rest of the United Kingdom, the cost of living is rising sharply as a result of Brexit. Higher prices for food and other basic essentials unavoidably means people — many of whom were already below the poverty line — will go hungry. Without even mentioning what this means for those who are forced to rely on foodbanks, we know what is happening to working families at the bottom and near the bottom of the economic heap. No food in the supermarkets, more expensive food elsewhere, equates to no food in the cupboards. Schools — schools in working-class areas — are asking children to bring in non-perishables to stock community larders to make up for the shortfall in the foodbanks, teachers are working harder than ever to organise basic sustenance for children during the holidays. And we are to believe London cares about affordable houses?

This, dear reader, is what defeat looks like. Britain has always used hunder to punish its victims. Our defeat is an empty stomach and the shameful feeling that we are eating as our neighbours go hungry. But this is what we voted for. This is the political system we chose to trust. So long as sensible middle-class opinion refuses to question what passes for democracy in Scotland, so long as the British administration in Edinburgh goes along with the charade that it has the power to negotiate with London, so long as ordinary working people acquiesce to this heartless regime — so long as the collaboration continues — this is what we get. This is the future.

There is no winning an independence referendum that is never coming! ‘Vote SNP’ for the power to decide our own future? ‘Both votes SNP’ to keep Nicola Sturgeon fighting for independence? How many times since 2015 have we been promised another referendum? I have lost count. After every election the subject goes quiet, hiding behind another set of excuses. And please don’t read this as support for ALBA. This isn’t about support for one party over the other, it is a blanket criticism of all politics that imagines it can beat a system using the tools of that system. Everything in British democracy, be it in Holyrood, Senedd Cymru, Stormont, or Westminster, is carefully designed to protect the integrity of the British colonial system.

When are we going to realise that the British system is like quicksand? The more we struggle, the deeper we sink, the more stuck we become. There is no negotiating with Britain. Hungry people shouldn’t have to beg for scraps. It is permissible for starving people to steal food. This is what we have to get into our heads. Scotland is being smothered. Our nation is being starved of everything that it needs to survive, to benefit all the children of our nation equally. It is permissible for us to stand up and smash the system that is destroying us.

This is what Ruth Davidson in ermine is really all about; we are being shown who has the power, who has the wealth, who has the privilege — and it ain’t us. As, in this perverted thinking, the monarch embodies the state and the constitution, Ruth in her new finery embodies what we are meant to accept — that we are defeated. This is quite actually lording it over us. Many will no doubt feel the same frustration I do at this horror of a situation, but that changes nothing. Ultimately, it changes nothing and nothing will change until we take the next step and change how we do things. We will never be shot of these parasites until we decide to use our own tools and resources and tear down the master’s house all the way to the fundaments.

19 thoughts on “Lording It Over Us”