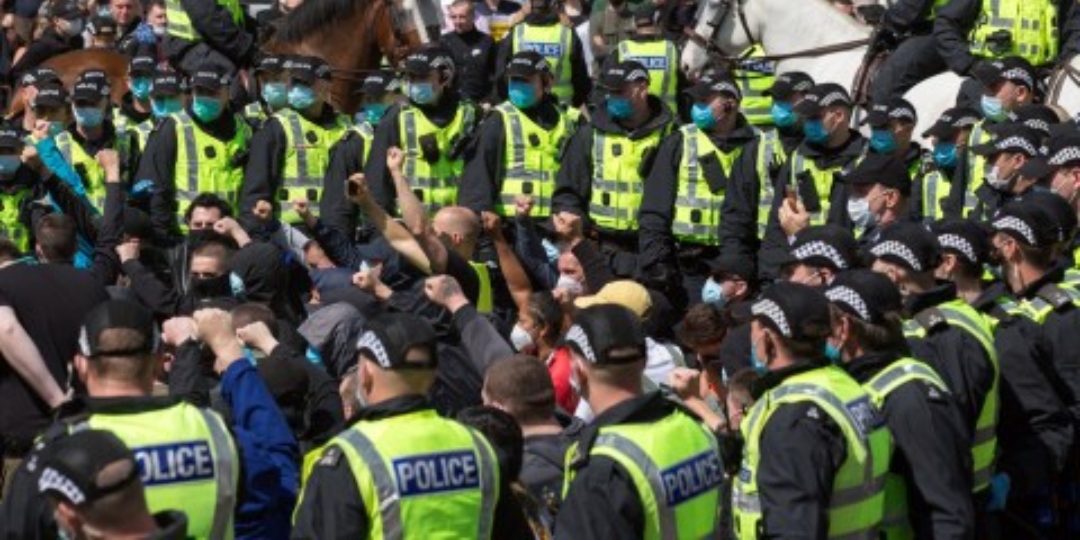 Flying with the Crows

IF IT LOOKS LIKE A DUCK and quacks like a duck … then it’s probably a duck. Some readers will no doubt be aware that on Saturday afternoon I managed to rattle the cage of the Green Brigade and ignite a social media pestilence. For some, this was the first time they had ever heard of the Celtic football club supporting ‘ultras’ known as the Green Brigade – and I must confess, I’m not all that familiar with them myself. The Green Brigade is a para-political group of Glasgow Celtic supporters which has been making its presence felt at Parkhead since 2006. An Irish Republican organisation of about a thousand members who have gained some decent notoriety for their outspoken support of Palestine and a number of other anti-fascist, anti-racist, left political causes. So, this article can hardly be much of an ‘attack piece,’ and neither is this really my intention.

Considering the politics of this group, I find myself in near perfect agreement. I am a card-carrying member of Sinn Féin and an active member of a Dublin cumann. I am a vocal critic of the State of Israel and a supporter of the Palestinian cause. Like its membership, I am Antifa and a committed anti-racist, and would consider myself well entrenched in the political left. So, how exactly was it that I managed to spark such an online festival of stink?

Any group making its way to a demonstration like this is sending a message, and it's not one that says: "Hey, we're… twitter.com/i/web/status/1…

At around midday on Saturday, I retweeted a video originally posted by Al Jazeera’s Zab Mustefa in which a large group of hooded and face-covered youths were scuffling with police at the corner of George Square in Glasgow. Infuriatingly, this is a sight we have gotten used to in Scotland since September 2014 – the sight of triumphalist Loyalist thugs storming into George Square and running amok. Only days before, under the cover of concerned citizens protecting statues from Black Lives Matter activists, Loyalists had occupied the square, rampaged about waving union flags and repeatedly singing the chorus line of Rule Britannia, before assaulting a group of people campaigning for asylum seekers’ rights. Seeing what very much looked like this about to happen again, I shared Mustefa tweet, adding: ‘The fascist Freikorps ultras are back on the streets of Glasgow. More Nazi salutes in the name of Great Britain.’ Clearly, I had wrongly assumed these were one and the same.

The kickback was immediate. Celtic supporters and Green Brigade sympathisers all over Scotland began demanding I ‘educate myself.’ Somehow this was different because these black-blockers are the good guys, they stand up for minorities, and raise money for charity. My bad! But it was an easy mistake to make, and I said as much:

Just a thought: If the Green Brigade doesn’t want to be confused with unionist neo-Nazis, maybe they shouldn’t behave like them.

Well, didn’t that upset them?! Over the course of the rest of the day, all through the night, and well into Sunday I was called every name under the sun – from the good guys! But I have to stand by the comment. Had I been passing the square with an aged relative or children – not that I could have been, Scotland’s in lockdown (or is meant to be), I would have been terrified. There was nothing in their dress or behaviour that distinguished them from the Loyalist thugs who had occupied the square a few days before. There were no Nazi salutes and no sieg heils, sure, but I can’t be alone in my inability to tell one group of organised heavies marching into the city centre from another. They all have a certain kind of dress – not a million miles from what far-right activists and football hooligans in England wear, they all have a certain walk, and a certain demeaner and attitude that leaves the bystander under no illusions; there’s going to be trouble.

Scuffles with police started on the corner of George Square. https://t.co/O3XCK07zqH

But this was ‘different,’ people were telling me in the comments. The stand off on the video and the verbal abuse being thrown at the police in the square on other videos was different because the police unfairly target and harass the Green Brigade because they are Republican! No shit, Sherlock?! I am perfectly well aware of how Republicans are treated by the police in the United Kingdom. No one needs to school me on the use of Schedule 7 of the Terrorism Act to detain ‘people of interest’ and generally harass and frustrate Republican activists. We do not want to make it easy for them, and there are things we can do that will absolutely help the British state and its lap-dog media construct a narrative which will be weaponised against us in the public arena. It is tempting, and it would be wrong to say I haven’t thought of doing it for the laugh, but me arriving into Scotland – at Cairnryan in a khaki jacket, shades, and a black beret would not be helpful. They want me to look like a monster, and the moment I hand them that image they will go to town with it.

Likewise, going to town looking for all the world like any other group of football ultras to attend a ‘peaceful protest’ is handing the British state and a hostile unionist media just the image it wants – and yes, it did look like that to me. When I can’t tell the difference between a bloc of Loyalists on the way to George Square for a riot and a group of Republican youths, then there is no chance Joe and Jane MacPherson reading The Herald can either. Don’t you see that?!

But then, honestly, I have my doubts about this actually being about a ‘peaceful protest’ – and this doubt comes down to optics. If you can remember Guy Ritchie’s 2000 film Snatch, you will remember the scene where Tommy, a gormless Cockney, is left stranded and petrified in a Traveller halting site after his protection, Gorgeous George, is knocked clean out by a single punch from Micky (played by Brad Pitt) – a bareknuckle boxing champion. The point the Travellers make to Tommy, who came to the site to buy a caravan, is that no one shows up for a negotiation with someone the size of George unless they have a point to make. George was ‘the muscle,’ and his presence was meant to convey to the Travellers that there would be repercussions if they ripped Tommy off.

What should have been a series of BLM/welcoming refugee protest at George Square, ended up as a conundrum because n… twitter.com/i/web/status/1…

Fifty to a hundred guys – and a few girls – dressed mainly in black, hoods up and faces covered, swaggering in a column towards a specified location in any city sends a very clear message! And we all understand what that message is. We don’t all button up the back. Regardless of how Police Scotland treat Loyalists, it was right for the police to intercept this little army – and it wasn’t wrong of witnesses and folk on social media to think this was a repeat of the last Loyalist day out. This brigade, this battalion, looked like a duck and it sure as hell quacked like a duck. And so, the point I made about them not acting like neo-Nazi unionists if they didn’t want confused with these thugs was a valid point – because there was just no way to tell the difference. And that they were marching in battle array told another story; if it so happened that a posse of Loyalists came for a ‘counter-demonstration’ in George Square there would have been a war – and both sides would be trying to give as good as they got.

Allow me, then, to be quite clear about this. While the politicisation of football supporters is to be welcomed – the politicisation of everyone is to be welcomed, the tribalistic mob mentality of the football ground is best left there. Argue with me as their supporters did, no football firm occupies the same moral high ground as striking miners or the families of hunger strikers. We are not at war. We are not engaged in a violent struggle against a racist and repressive government. So, we do not need nor want the symbols of bloody conflict – nor even the optics of it. You can dress it up as you please, but this is not how anti-racism demonstrations work and the Green Brigade never had the support or solidarity of the largest anti-racism campaign bodies or any of the trade unions in the country. By all means protest racism in Scotland – I am with you, but mingling this with a Glasgow Old Firm identity is unhelpful. It is well known that unionists will bandwagon opposing campaigns. When Republicans fly Palestinian flags, the Loyalists will fly Israeli flags – we know this. How then can a Celtic faction think further polarising issues of race, as markers of tribal difference, benefit the fight against racism? Fight racism, but fight racism in solidarity with the victims of racism and not by imposing intra-national factional agendas on it which only subvert the real fight against racism, and turn it into yet another theatre of an age-old sporting rivalry.

8 thoughts on “Flying with the Crows”