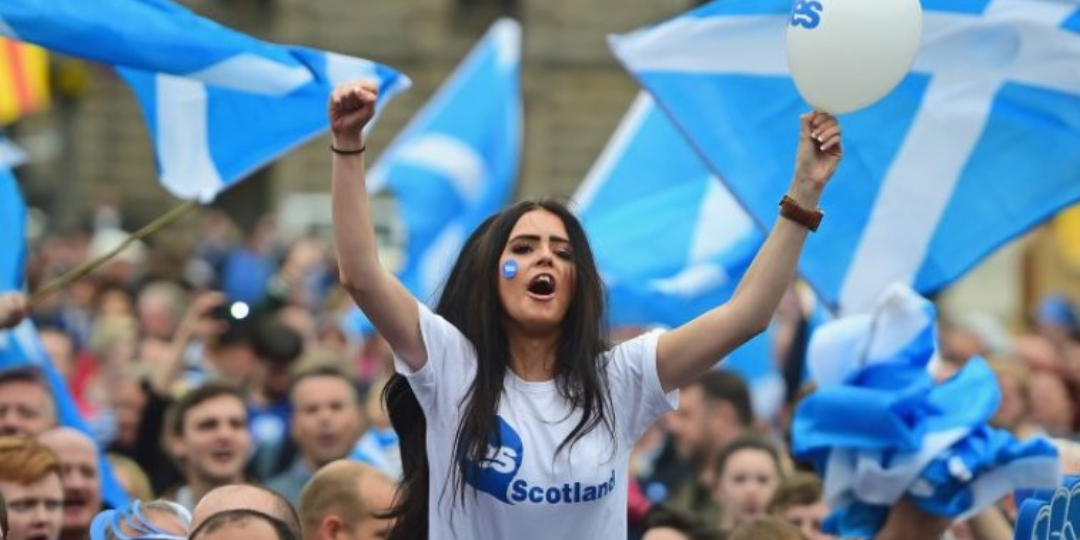 THE 2012-14 CAMPAIGN for Scottish independence was both the high-point and greatest frustration of many Scots’ political lives. So often on social media we read accounts of how it was this campaign that woke so many up to politics and brought them into the campaign for independence. We can’t deny that the 2014 referendum sparked a renaissance, that it made Scottish people alive to political debate in a way few would have imagined we would be after centuries of relative docility and near total popular disengagement from the government of our country. From the unionist assumption that we are ‘not genetically programmed’ to make political decisions to a country now fighting tooth-and-nail for its place in Europe and greater national autonomy, there is simply no argument – no matter the outcome then – that the 2014 referendum campaign has made Scotland a better place. It was like a failed prison break. We might all still be sitting in our cells, but now we have an idea of what it takes to get out – we’ve discovered some of the jail’s vulnerabilities. There is a hope and a fire in us that just wasn’t there before we got our Yes badges.

A day is a long time in politics, or so the saying goes, and we’ve now been at this for five long years. The continuing campaign for independence has evolved into the political equivalent of trench warfare – and in some regards, at least, the parallels are striking; it’s dirty, frustrating, immensely costly for those doing the fighting, and we’ve scarce gained an inch of mud. Moreover, by this point most of us have realised it won’t be over by Christmas. Being a blogger in the field, sometimes it feels like I’m an editor of The Wipers Times, daring to take a poke at those sipping brandy and smoking cigars back in our own GHQ in an attempt to rouse the troops whose morale seems always to be dangling precariously somewhere between breaking and going postal. It’s often a thankless task. Drawing attention to our own weaknesses has made me (I can’t speak for all pro-independence bloggers) enemies on both sides of no-man’s-land. But I’m not ready to give up.


Five years ago Scotland was cheated. Our country was stolen by a shower of the most vile and corrupt politicians we have ever known.

Scottish independence has become the defining struggle of my life. It has moved me from the blinkered left politics of class struggle to a national politics which realises that what John Maclean wrote off as ‘pink socialism’ cannot liberate the poorest in our country without first liberating the nation. It has brought me to where I never thought I would be – an ally of the nationalists. This has always been an uncomfortable thought for independentistas; that every nationalism – even our so-called civic nationalism – is forever shadowed by the dark shadows of exceptional nationalism and ethno-nationalism. It is rare, but few of us have not had at least some exposure to these darker forces in our movement. We have, as a movement, become increasingly aware of this and we have responded to it well. We have moved from the label of nationalism, seeing its darker power in the British nationalism of our opponents, and articulating independence as the right of a country to govern itself according to the temperament of the national body politic – of all the people who make Scotland home.

Yet, the fact remains that we are five years down the road and Scotland is still in a British prison. 2014 was a failure – but is was not a defeat. 2014 taught us a great deal about the jail we are in, making the next break out more likely to succeed. So, let’s have a look at what we have learned in the past half-decade. Let’s spell out what we know and how we can put it to good use.

In 2014 we saw ourselves as a small nation in a David-versus-Goliath fight. Realistically, in the beginning we did not expect to win. One theme repeated frequently at the time was that we just wanted to be a nuisance, that we wanted to have a bit of craic, upset the apple cart, and maybe – if we got lucky – give the English political establishment a bloody nose. We saw ourselves as a pesky younger sibling trying to make a point. But something changed. At some point in August 2014 it dawned on us that we might win – that we had a real shot of securing independence. What then? Our preoccupation was with the campaign and not with the result and its aftermath. What would we do with an independent Scotland? We’d actually be the custodians of a state of our own. We’d be responsible for it. I have always believed, on reflection, that that realisation – that moment of clarity – caused us to falter. From that point we bottled it – we became a defensive campaign just as a terrified union went on an all-out offensive.


Scotland being wee can be strong - Remember David and Goliath - who won? #VoteYes

That question, however – What will we do with an independent Scotland? – has shaped and strengthened the movement in the past five years. We have a far better vision of an independent Scotland than we had back then. We have stopped seeing ourselves as a younger – inferior – sibling out to wind up our big brother England. We have come to see the British state in a sharper light – not as our big brother, but as a colonial force, as an oppressor, as a thief. Only in arriving at the conclusion that Scotland in union was and is a historical injustice have we come to truly realise that Scotland is an equal to England and has an equally equal right to the final say over its own affairs as England enjoys in the British state – the Westminster state of Greater England. Since our 2014 failure we have become a true independence movement, motivated by a better understanding of the nature of the union; that we are shackled to it, dominated, and controlled for the sole benefit of London and the British state. Our eyes have been opened to the fact that Scotland is a British resource and not a nation and a people in its own right. We’re not here for the craic anymore.

That’s what we learnt about ourselves. What we learned about the prison and its guards is every bit as valuable. In the past we may have seen the upper crust of English society as our social betters. Colonialism works by ingraining in the dominated a sense of inferiority, seeing themselves as children in a relationship with authoritarian adults. The independence campaign has peeled this back. We have seen behind the veil and we have seen the British establishment for what it really is – a confidence trick. It is a class and a society drunk on power and privilege. It is fragile and very much out of time. Its arrogance is a weakness we have seen exploited by the Irish Republic and by the rest of the European Union. Only yesterday we heard the Prime Minister of Luxembourg destroy the British Prime Minister without hesitation and without fear. The powerful British establishment means nothing to a nation like Luxembourg – a country of less than half a million people.

Everyone in the world has come to see Britain as a bullshit artist. We now live in a world where British television broadcasts the leader of Sinn Féin talking adult to adult about Britain’s bully tactics, immaturity, and bad behaviour. This would never have happened in the 1980s when the British media was doing everything in its power to distort the truth of what was happening in Ireland – for the most part a former British colony. For years now HM Prison Great Britain has been living off its Victorian reputation as the world’s greatest prison, but it hasn’t changed with the times. Its walls are rotting and the bars are breaking with rust. The guards are fat and overpaid. They spend their days drinking and crying into their glasses about the good old days of stone breaking and floggings. But the truth is that the prison is a dinosaur. It’s falling to bits, and we have realised that it is no longer strong enough to keep us. We have figured out that the real prison was the one they built in our minds. We have overcome the cell, the yard, and the prison.

Five years after 2014 it has become obvious that the only ones keeping us in this damn mess are ourselves – the defeated, the prison snitches who feel in their bones the consequences of freedom. We have reached a point in the campaign where we know no prison break is needed. There is no need for a clever plan and a scaling of the walls, no need for a tunnel or a roof break. All we need to do is push the bars and they’ll give way. The guards are in a stupor or in a bedroom with an attractive pig’s head. They’re game is up. Ours is only beginning. Five years has been a long time, but the life of the nation is longer. These five years have been a pain in the arse, the lessons we have learned have been valuable – they have brought us so much closer to being the independent nation we want to be. But please, please let’s not wait another five.

4 thoughts on “Five Years On”