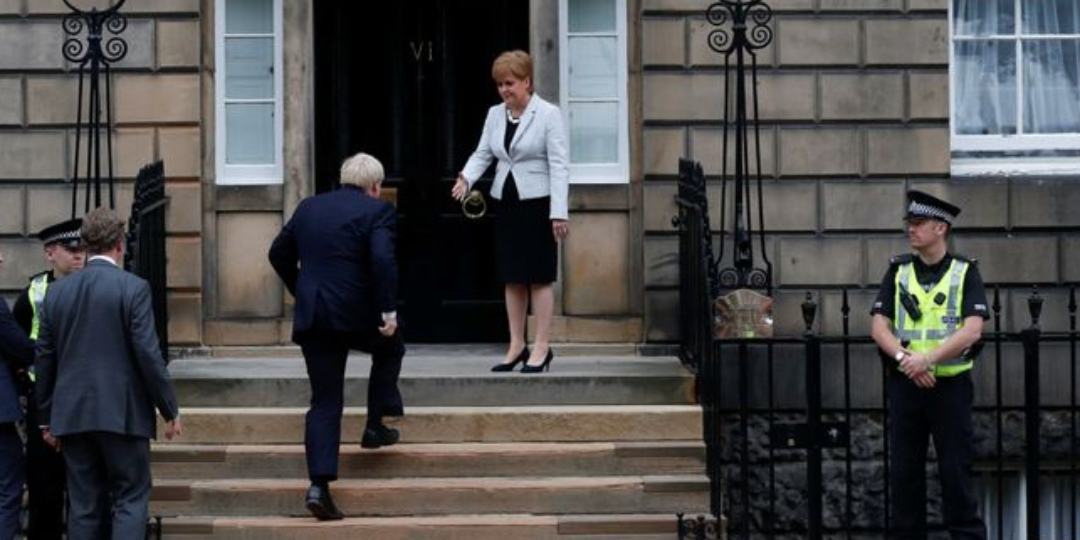 The Mood is Changing

BORIS JOHNSON has really touched something in the Scottish national psyche. Theresa May, for all her awkward incompetence, managed somehow – quite inexplicably, considering her appalling record on immigration and her handling of the Grenfell tower tragedy – to keep the lid on the anger bubbling under the surface of British society. But, in his first few days in office, her replacement has lit the touch-paper, changing the mood in Scotland and Wales from an almost resigned simmering frustration to an enthusiastic outpouring of rage. When independentistas and ordinary folk who voted No in 2014 find common cause in their rejection of the British Prime Minister, it’s safe to say that something is changing – something is stirring.

Everything boiling across Scotland was etched in the cold glare of the First Minister yesterday as she unceremoniously welcomed the Prime Minister and his entourage to Bute House. There was no red carpet and no warm embrace, the only smiles were from Johnson looking like a nervous chimpanzee about to be castrated. His attempt at a power-play; reaching out his arm to usher Nicola Sturgeon into her own residence, was firmly rebuffed. The body language on the steps was a dead giveaway. It was clear for all to see that Sturgeon was in charge, and the Prime Minister reduced to a scolded schoolboy – showing himself to be the nudnik promoted way above his abilities that he is. There were no union flags in the crowd of onlookers either, only the peal of hooting and booing of Edinburgh people sick to their stomachs that such a pointless waster has any say over their country.


Boris Johnson is an absolute gift to Scottish independence. 2014 No voters don't want Brexit and they don't want th… twitter.com/i/web/status/1…

In recent times, no one other than Jim Murphy and Donald Trump have had this treatment – and even this is telling; there’s something of the swaggering imbecile to all of them. Scotland doesn’t suffer fools gladly, and, as he crept out the tradesman’s entrance at the back of Bute House after the meeting, Johnson was no doubt keenly aware of how disliked he is in our country. While it may be muted in the British press, the feeling abroad is pretty much the same feeling we have here in Scotland: That Scotland is already packed and ready to leave the union. If the scenes on Charlotte Square are anything to go by, England has lost its chance to have Scotland secede from the union on amicable terms – this is going to be an acrimonious divorce.

But this feeling is not limited to Scotland. In Cardiff too – the Welsh capital – Johnson’s visit was greeted with jeering and hisses. He is not a popular man, and his presence there has only highlighted the shift taking place in the politics of Wales. Plaid Cymru, the Party of Wales, is gaining ground even in the most traditionally unionist areas and already support for Welsh independence is above the point from where Scotland started in 2012. The lesson which the British government should of course take from events in Scotland since the last referendum is that nothing can be taken for granted. Given the right circumstances – or the circumstance of a deeply unpopular Prime Minister, Wales may soon be agitating for an independence referendum of its own.


Here’s the statement issued by @merrionstreet following my call with @Borisjohnson https://t.co/2WyjtTNmVg

Westminster’s precious union is coming apart at the seams; Scotland shows no signs of cooling down, Wales is promising to heat up, and after his to-the-point chat with An Taoiseach Leo Varadkar this morning Boris Johnson knows neither Dublin nor Brussels will move an inch on the Irish border question. Even without the backstop, the mood in the six counties has changed. Peace and twenty years of reconstruction and inward investment have utterly transformed the North – a majority of unionists and nationalists want the border open and want to remain in the European Union. There is a perfectly good reason Arlene Foster and the DUP are reluctant to reopen the Stormont assembly; they know they can no longer prevent a Sinn Féin majority and a 1919 style declaration of independence qua Irish unification. To quote Waterford Whispers, the Irish satirical fake news website:

Nothing is going right for Britain. The wheels are off Johnson’s big red bus. He can’t even imagine a hostile reception in Edinburgh and Cardiff – never mind Belfast – is the worst of it. His entire, hopefully brief, time in office will be marked with endless protests, disorder, and rioting in London. Boris isn’t even a popular man in his own house. His no-deal Brexit is only going to be rocket fuel to the inferno. Food shortages and rationing, a dearth of essential medicines and medical supplies, and a tightening of the already too tight austerity belt will make England ungovernable. Academics and members of the House of Lords are talking openly about state failure and civil disorder to the brink of civil war. Come Hallowe’en the British government will have bigger fish to fry than Scotland, Wales, and the north of Ireland – and then there’s the “Kippers.”


No UK prime minister (or foreign dignitary) has ever been welcomed to Bute house like this. Deserved every bit of i… twitter.com/i/web/status/1…

England is tearing itself to bits, coming undone under the pressure of decades of austerity and the anxieties of a looming Brexit. The far-right is nipping at the feet of both the Conservatives and the Labour Party, both parties are continuing to weaken themselves by chasing votes from UKIP and the Brexit Party, and all they are achieving is the legitimisation of the extreme right. A single misstep on the part of the Tories to deliver the Brexit the right demands will only be a gift to the likes of Nigel Farage at the next general election. Brexit delivered or Brexit failed, the outcome is the same for England – utter mayhem. The British state has never been so pathetic. There has never been a weaker Prime Minister. The unparalleled mess – writ large in the £100 million to be spent on propagandising a no-deal Brexit – is changing the mood everywhere.

Seeing the mood shift of Scotland in Nicola Sturgeon’s demeanour gives us a renewed trust in a Scottish government which has, over the past twelve months and more, appeared over hesitant, even reluctant to press ahead with another independence referendum. Throughout the independence movement in the country there has been a growing impatience with the SNP – an impatience I have felt myself, but the tangible frostiness on display yesterday sent an unmistakable message that Scotland has arrived at the end of its tether. All available options have been tried, and even though Johnson did not rule out another Scottish referendum, he didn’t exactly grant one either. We remain at the same impasse as we did this time last year – but the difference now was written all over the First Minister’s face. The end of our tether may prove to be the end of the line. With Brexit now only weeks away, the mood in Scotland is no longer passive. More than ever before we are restless, and the feeling now is that we are ready to get up and move on independence.

Nicola Sturgeon: ‘this government and the path it’s pursuing is dangerous’

7 thoughts on “The Mood is Changing”