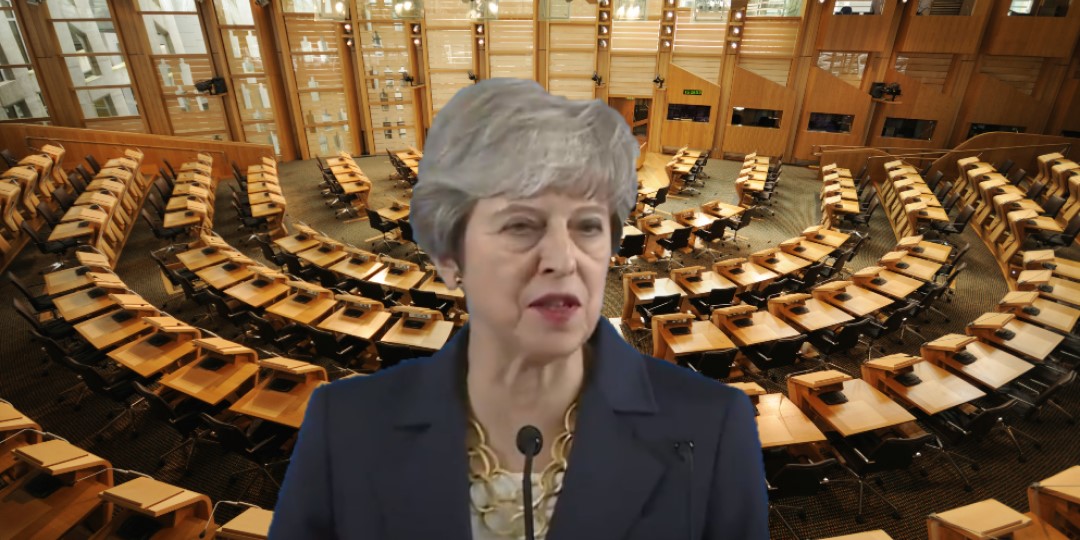 The Threat to the Scottish Parliament

ONLY A FEW WEEKS AGO, during a talk in the Highlands, Ian Blackford, the leader of the SNP parliamentary group in Westminster, dismissed out of hand the suggestion that the British government would rescind the Scotland Act and close Holyrood – saying the people of Scotland simply would not accept it. The people of Scotland have accepted quite a bit since September 2014. We have accepted being taken out of the European Union against our will, and this despite the promise that voting to remain part of the United Kingdom would protect our place in Europe. We have accepted the autocratic decision of the London government to shut our democratically elected government out of the Article 50 negotiations. We have accepted the refusal of the British Prime Minister to grant us another Section 30 in order to hold another independence referendum – in spite of that having three separate democratic mandates. When Ian Blackford tells us what the people of Scotland will and will not accept, it appears to me that my compatriots are willing to put up with an awful lot. Scotland would, I suspect, accept the closure of the Edinburgh parliament because the truth is that there is no recent tradition in our country of mass radical resistance.


"What if Boris Johnson does away with the Scotland Act?" Not even Ian Blackford was comfortable with the answer he… twitter.com/i/web/status/1…

Scots are genuinely and rightly concerned about the future of devolution. There is nothing permanent in the current constitutional arrangement, and nor can there ever be. It matters not a jot what the Scotland Act says or what any one politician says; sovereignty in the United Kingdom rests only in Westminster. No law and no treaty can bind the power of this or any future London government to any particular course of action. We can talk about the Claim of Right and Scots Law all we like, the legal reality, for so long as we remain a part of the United Kingdom, is that the absolute power of the Crown in Parliament – England’s notion of state sovereignty – reigns supreme. What this means is that the British government can enact legislation to close down the Scottish parliament and return our presently devolved powers to the House of Commons when it sees fit. Legally, we are entirely powerless to change this situation.

So, the question is: Will the British government end devolution in Scotland? While there is no way to predict with certainty what will happen, it is reasonable to assume that, under certain conditions, this is what it will do. The majority of Brexit supporters and a number of Conservative MPs south of the border would rather see the breakup of the union than lose their chance to leave the European Union. This poses the British government with a dilemma; given the size of the Scottish economy – well in excess of £200bn – and the projected cost of a no-deal Brexit to the economy of the whole of the United Kingdom – also north of £200bn, the London government knows it cannot afford the Brexit England is right now demanding without holding on to Scotland. The Scottish government has already withheld legislative consent for the EU Withdrawal Bill and will continue to be a thorn in the side of the British government throughout a process that will seriously damage Scotland and likely put us at a significant trade disadvantage to the six counties in the north of Ireland. While the Scottish National Party remains in government, and for as long as there is a pro-independence majority in Edinburgh, the Scottish parliament has the power to derail England’s Brexit.

As Brexit draws nearer and as the true costs of a chaotic “Apocalypse scenario” hit the ground after 31 October, the resistance of the Scottish parliament will increase. There is only one solution to this dilemma: London will only be able to keep Scotland and deliver England’s Brexit for the whole of the United Kingdom if the Scottish parliament is at least temporarily suspended. Today the Prime Minister visited Scotland to conduct an ominously named “devolution review.” Her finding – likely written before she left Downing Street – was as follows:

What she is saying is rather simple: The Scottish government is an enemy of the current constitutional arrangement, devolution is working to the benefit of Scotland and not England, and that unless the SNP is ousted the British government will use every power at its disposal to “strengthen that union.” What “every policy lever” means is exactly what it says on the tin: The Westminster parliament has unlimited power and unfettered sovereignty. It can do whatever it wants and whenever it wants – up to and including closing the Scottish parliament – to ensure that the union is working the way England wants it to work. She made it clear to the people of Scotland that this threat – and this was a threat – has been made because we, the Scottish people, are continuing to vote for the wrong party – the SNP. Coming at this as the head of the English government, the Scottish National Party has become a real and present danger to the political aspirations of the English-British state. If we do not do the right thing for England and put the SNP out of government, then the British government will do it for us. There is no other way to understand what she has said.


“I’ve learned that while other parties can be relied on to work with the UK government in good faith to make devolu… twitter.com/i/web/status/1…

It seems clear to me, and it is equally clear that I am not alone in thinking this, that the future of devolution hangs in the balance, and that the London government is right now weighing up the benefits and potential costs of such a move. England wants Brexit. It wants Brexit even if that means losing Scotland and the north of Ireland. The English-British government has to give England what it wants, and it has to do this without losing Scotland. Tonight, we can rest assured that people are burning the midnight oil in Whitehall to solve this conundrum – and it’s a no-brainer: Brexit can only be won and Scotland kept if a way can be found to neutralise political resistance in Edinburgh.

The axe is already at the root. Fighting to preserve the devolved parliament under the present conditions is an utter waste of our time and efforts. Holyrood, as a devolved administration of the United Kingdom, will always be vulnerable to the whims of England and the British parliament. Devolution is not and never has been power returned to Scotland. This is true only in a notional sense. The power devolved to the Scottish parliament is leased power – a share in the power of Westminster in Scotland. As such, it will always be subject to Westminster and the decisions of the British government – a political context in which Scotland is kept at such a democratic deficit so as to be completely powerless. There is and has only ever been one reality in which power is returned to Scotland, and that reality is independence and the reclaiming of our national sovereignty from London and the Westminster parliament. Securing independence is the only protection we now have from this threat, from this ultimate power grab.

Theresa May does not trust Nicola Sturgeon | Indus News

13 thoughts on “The Threat to the Scottish Parliament”