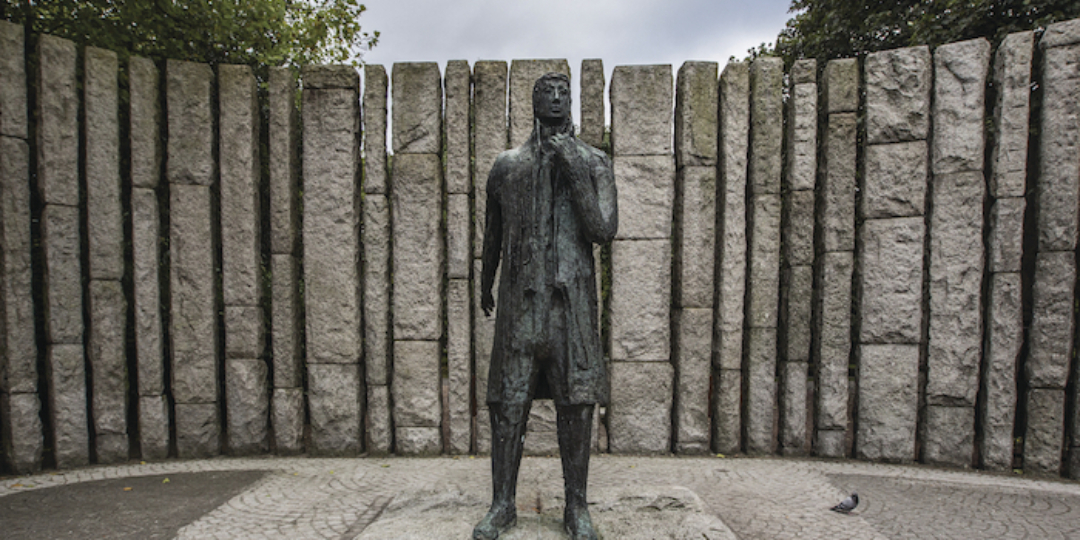 The Grave of Wolfe Tone

“YOU HEADING OFF ON PILGRIMAGE?” my friend asked sardonically when I told her I was on my way down to County Kildare, to the churchyard at Bodenstown, to visit the grave of Ireland’s patriot hero Theobald Wolfe Tone. “No, nothing like that,” I lied, before attempting to explain my reasons for seeking inspiration from beyond the grave. It wasn’t that I had lied as much as it was that I hadn’t yet realised that what I was doing was going on pilgrimage. Armed with a copy of The Best of Pearse in my coat pocket, I suppose now I was on a journey to pay homage to the hero of my hero. Wolfe Tone, for the benefit of readers unfamiliar with the name other than that of the iconic Irish folk band, was a young Dublin-born Protestant lawyer who in 1798 led an Irish rebellion against British rule. Following the defeat of the rebellion he was arrested at Letterkenny and taken to Dublin for trial.

During his court martial he showed neither regret nor remorse other than that for some rebels in Wexford who had committed atrocities against civilians. He defended the sacredness of the cause of Irish freedom and accepted he would most likely be sentenced to death. He saw this as “no sacrifice.” Standing before his judges in the uniform of a French adjutant-general he asked but one favour:

I know my fate, but I neither ask for pardon nor do I complain. I admit openly all I have said, written, and done, and am prepared to meet the consequences. As, however, I occupy a high grade in the French army, I would request that the court, if they can, grant me the favour that I may die the death of a soldier.

His request to face the firing squad; “the death of a soldier,” was denied him by the Lord-Lieutenant of Ireland, Lord Charles Cornwallis – the man who was defeated by and surrendered to General George Washington in 1781. Languishing in his cell in the Provost’s Prison on Arbour Hill, Dublin, and awaiting his execution by hanging – the death of a common criminal, he cut his own throat. A traitor to Great Britain and a martyr for Ireland, his body was returned to his family to be buried at Bodenstown in an unmarked grave next to his father, Peter Tone. In 1945, after the end of the Free State and the birth of the Republic, he was given a gravestone. Later, in 1971, as the Troubles were getting started in the north of Ireland, his gravestone was replaced by a shrine.


"...we stand in the holiest place in Ireland, for it must be that the holiest sod of a nation's soil is the sod w… twitter.com/i/web/status/1…

God only knows what I had expected to find at his grave, but whatever it was I had expected, it was something else entirely that I found. His grave has been a place of veneration for Irish nationalists and republicans since the early 1840s and has been a place of pilgrimage for Irish Republicans since 1873, and it was obvious to me today that the more the structures around his resting place have functioned to mythologise this “doer of the immortal deed,” à la Pádraig Pearse’s 1913 graveside oration, the more “this dead man” has been buried and obscured.

What stands there now in the “home of the dead” is a cold and boding mausoleum to an icon, a memory, of Ireland’s long and painful struggle for independence; a temple of a kind to the father of Irish Republicanism. It lacks the sorrowful warmth of the final resting place of a loved one. Instead it has been reconstructed and reimagined in each new generation of that struggle, resulting in a grey and hardened edifice of celebration – of the species of the Mass, a celebration of atoning sacrifice – and of commemoration – of the species of the Eucharist, a reliving of the passion and death – but without the resurrection. This is, as Thomas Davis’ lyrics suggest, not the tomb Ireland a nation owes Wolfe Tone. It remains unfinished because the Irish Republic itself is unfinished.


Before returning to Scotland I have come down to Bodenstown in the county of Kildare to pay my respects at the tomb… twitter.com/i/web/status/1…

This place of remembrance is the monument of unfinished business, the memorial of the losing side; where after each crushed rebellion the defeated came heartbroken to remember their dead, where after the Famine the suffering and anguish of a nation was poured out like a libation, and where – even after the Easter Rising, a war of independence, and a bitter civil war – the Republic gathered to weep, frustrated that An Saorstát Éireann – the Free State – remained in the clutches of Britain. This is the place where the Republic waited, keeping watch, patiently biding its time, as British soldiers shot down unarmed civilians in Belfast and Derry. This was Golgotha – “the place of the skull” – in June 1981, at the annual Republican commemoration at the grave a month after the deaths of ten young Republican hunger strikers in the Maze Prison, County Down. Here the Republic is given solace and ever reminded of Wolfe Tone’s words from the dock:

From my earliest youth I have regarded the connection between Ireland and Great Britain as the curse of the Irish nation, and felt convinced, that while it lasted this country would never be free or happy.

Standing beneath the dais and the plague bearing the carved image of Wolfe Tone’s westward facing head – with his back turned forever to England, I was struck by the realisation that this is a terrible and an awe-ful place. It is shrouded by and immersed deep in the enveloping darkness of Ireland’s most sacred and terrifying struggle. Without fully realising this, I had already touched on its meaning when I penned ‘The Body of Resistance,’ writing:

Struggle against the oppressor, and more especially against the powerful imperial oppressor, is a Titanomachy both outwith and within – it is the test of a nation’s strength within the nation against the strength of the foe as much as it is a test of the patriot’s body within his or her own body.

The terror and awfulness of the place and the memory as it has become is no different to the holy terror, the fear and trembling of the prophet as he encounters God: “Will not his majesty terrify you, and the dread of him fall upon you (Job 13:11)?” Indeed, Bodenstown churchyard, the grave of Theobald Wolfe Tone, is a place of dread, of terror, and filled to overflowing with the awful and fearful encounter with the uncompleted story of Ireland’s struggle fought in every part of the nation and in the deepest wells of the bodies of each of her patriots. There is no mistaking that this is the bamot, the high-place, the very altar of the most supreme sacrifice of the Irish nation. Again, Pearse was right when he described it as the “holiest place in Ireland.” But this is not Sunday School. This is the holiness of an older god, a warlike god who calls the peoples and the nations to a reckoning:

Let all the inhabitants of the land tremble, for the day of the Lord is coming, it is near – a day of darkness and gloom, a day of clouds and thick darkness! Like blackness spread upon the mountains a great and powerful army comes; their like has never been from of old, nor will be again after them in ages to come.
– Joel 2:1-2

This is the temple before the altar of which another Rebel could intone: “I say to my people’s masters: Beware! Beware of the thing that is coming, beware of the risen people who shall take what ye would not give.” And this is, at least in part, the meaning of Wolfe Tone’s grave; that its incompleteness is the promise of completion, that this is not over – that Ireland’s enemy should take heed. Something “is coming.” This grave in Bodenstown is not pretty. Its symbolism and meaning are dark – nightmarishly dark, but they are necessary. This is the hardest and coldest cavern of the Irish Republican psyche, the deepest recess of self-abnegation and nihilism to which the patriot must first retreat before he or she can ever be capable of mustering the hellish rage that is required to stand up to and vanquish – even in his or her own body and soul – the chthonic monster that is Great Britain in Ireland. Bodenstown is the Omphalos – the naval – of Ireland’s Republican spirit. It is at once Ireland’s holiest and darkest place, the truest meaning of hallowed.

As a Scottish Republican, an independentista, and a Christian – the child of a gentler God, my pilgrimage to the green grave at Bodenstown troubled me. It was not what I had expected to find. It both frightened and terrified me. While it presented me with a fuller, more accurate, more truthful version of Ireland’s history and agony, it convinced me that this is not what I want for my own nation. Bodenstown is what Ireland has because of its lack of choice. The memory of Wolfe Tone and the coldness and stern darkness of this place were, like so many agonies and sufferings, imposed on Ireland and her gentle people. This was the terrible cost of their heroism. I pray to God and all the saints and martyrs of Scotland – and Ireland – that Scotland escapes such a fate.

4 thoughts on “The Grave of Wolfe Tone”