What is Wrong with Ross Thomson?

What sort of person, apparently suffering from too much work-related stress, gets drunk and possibly smacked off their head on cocaine in a bar crowded with colleagues and starts sexually assaulting the people around them? Reading this report, the reader would be entirely right in assuming these to be the actions of someone who has taken complete leave of their senses. These are not the actions of a well-balanced individual. Psychologists – criminal psychologists – would have a field day with this behaviour, no doubt characterising it as the behaviour of a sociopath or worse; the tell-tale signs of psychopathy – warning that the perpetrator is capable of violent acts of incredible depravity. Whether or not we take these actions to the psychoanalyst’s couch, this is not the behaviour of a man one would be comfortable leaving in charge of children or vulnerable adults.

Yet, this is precisely where we find ourselves with the 31-year-old Member of Parliament for Aberdeen South, Ross Thomson. On Tuesday night last week – 5 February – the sergeant at arms, the head of security for the House of Commons, was informed of an incident in Stranger’s Bar, to which the police had been called. Mr Thomson had had to be removed from the bar a number of times after reportedly feeling other patrons’ crotches and attempting to force his hands down their trousers. Police who attended the scene took a statement from Thomson before escorting him from the premises. Serious allegations which, if successfully prosecuted, could see Thomson – as a category 3B sex offender – locked up for 26 weeks.


Ross Thomson here, just moments ago in the House of Commons. How pathetic and sheepish does he look? 😂… twitter.com/i/web/status/1…

Three days after the reports of his alleged behaviour were reported widely in the media, Mr Thomson took to Twitter to deny the allegations, saying they were “from anonymous sources” and “completely untrue,” and that “no complaint has been made to the police.” Not surprisingly, the Conservative-aligned newspaper The Telegraph reported the distress these allegations had caused Thomson and reiterated the point that the matter had not formally been taken to the police. On Friday morning the Tory establishment position was that there was nothing to see here, and that normal service would resume on Monday morning when Ross would return to work.

But no such luck. On Monday morning a formal complaint was lodged against Thomson to Westminster’s standards chief by a young male parliamentary researcher, one of the alleged victims of Thomson’s groping spree. It goes without saying, at this point, that both the Conservative Party and the Scottish Conservative and Unionist Party – to which Thomson belongs – have declined to comment. In a highly suspicious move, and in spite of protesting his innocence, Ross Thomson has referred himself to his party’s disciplinary panel. So, why – it must be asked – would an avowedly innocent man, wrongly accused of sexual assault, turn himself in to a disciplinary committee? It is all beginning to look like he ought to refer himself to a therapist.

If his former husband is to be believed, then there is a troubling and worrying pattern to Thomson’s behaviour. On the afternoon after the alleged sexual assaults in the Commons’ bar his ex-husband tweeted and then deleted the following:

When your ex husband is arrested due to groping men in a parliament bar and it makes national news. A good insight in to why we are no longer together…..

According to Douglas Mathewson, Thomson’s former husband, a man who one would expect to know Ross Thomson well and intimately so, this outrageous and criminal behaviour is not surprising. In fact, to Mathewson, the reports are insightful and explain why they are no longer a couple. Evidently, some more digging has to be done into the Aberdeen South MP’s past.

This candidate worked with my friend (both of whom belong to the LGBT community) in the Better Together campaign back in 2014, and the things he told me about his experience with this person and his other gay tory buddies are truly fucking horrifying. Sex shaming, verbal and physical sexual harassment that borders on outright sexual assault, using threats of outing his homosexuality as a tool of coercion for sexual favours (which is almost definitely illegal), intimidation, and also almost bullying a disability activist to the point of suicide. Apparently, this is a really common state of affairs in the local Tory party.

“This candidate” is, we are told, a Scottish Conservative who was, at the time the post was written, “part of the local council.” He “failed to get elected as an MSP” in 2016 but managed to get into Holyrood through the “back door through a party list.” Sound familiar? If that’s not enough information, the author continues. He says that the candidate in question is now – in April 2017 – running as an MP, and that he has been in the news before – relating to an expenses scandal that “concerned him sharing a hotel room with an associate.”

Ross Thomson was an Aberdeen City councillor. Following a number of failed attempts to get elected to the Scottish parliament, he was elected through the Additional Member System – the list system – after SNP MSP Maureen Watt retained her seat in the 2016 elections. In June 2017 he was elected the MP for Aberdeen South. Then, as sure as night follows day, there is the expenses scandal. Indeed, Ross Thomson was ordered by Conservative Party bosses to repay the £120 he had paid for an over night stay with a “friend” – not his husband – while he was still in his civil partnership. There is no doubt that this anonymous Reddit post is about Ross Thomson.

Usually, we can discount out of hand anonymous posts on social media. We are right to do that, and this is why this post has remained for so long in the undergrowth of Scottish public life. But when Thomson then goes and lives up to the character portrayal of him in the post, and when his former husband at least appears to corroborate the ickiness of his character, we are forced to give it a fresh hearing. Rumours of sexual harassment, of sexual bullying, of sexual coercion, and sexual assault have been stalking Ross Thomson for quite some time. These are entirely anonymous and spurious, for sure, but then – all of a sudden – it all appears to have been acted out in full public view in the Commons’ bar, committed – allegedly – against people lower in the political hierarchy than him – all conforming, and exactly so, to the report on Reddit.

If this is true, then we have to take a good, hard look at Mr Ross Thomson. He is power hungry, sycophantic in the extreme, as we have seen in his snivelling antics around Boris Johnson, and now we are possibly faced with the prospect of him being a dangerous and potentially violent sexual predator. But, and as the Reddit post articulates, he has weaselled his way into an environment known for such disgusting excesses. Even more worrying, right now, is the mathematics of Theresa May’s fragile Westminster majority. Of course, not wanting to lose a brown-nosing blue MP from the government benches, the Tories will want this to be dealt with in-house and behind closed doors. But, if this is true, and if this is the character of Thomson, then we must demand a public enquiry. If this is true, then this is a disaster waiting to happen.

20 thoughts on “What is Wrong with Ross Thomson?” 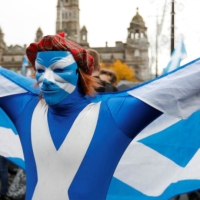