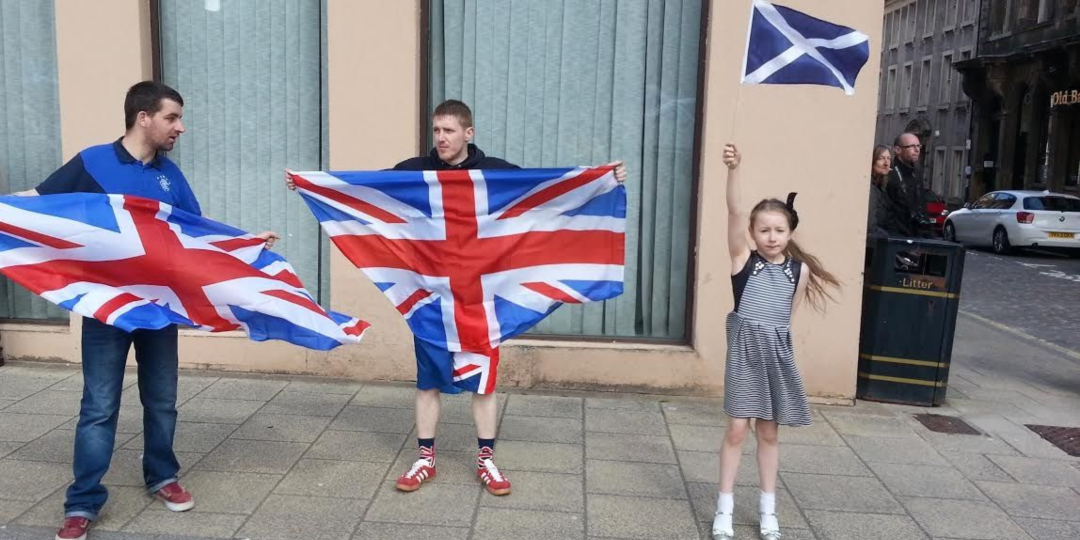 Get Up Off Your Knees!

ANOTHER CANCELLED DATE. Just off the phone with an organiser of a prominent and active Glasgow Yes group. She was explaining she was gutted with the decision they were forced to make, the area in which their group campaigns for independence is “wall-to-wall with tories” and that hosting a speaker like me would have “serious repercussions” for members of the group who have employment and businesses in the community. Once again the union, with its lying and slanderous propaganda machine, has defeated the will of the rising people; the people for independence – but not yet. It is difficult not to be angry, not to be disappointed and let-down. While anger is the correct response, it is important to focus this rage in the right direction. People want independence, there are people all over Scotland who need independence, but given the arsenal the British nationalist media has at its disposal it is apparent the proclamation of freedom is still terrifying to many.

What’s all this about, then? Last week the Daily Mail deliberately and spitefully took my reportage on the deteriorating condition of the Good Friday Agreement in the occupied six counties out of context so as to paint me a supporter of violence. It stated that I considered British soldiers legitimate targets for Republican gunmen, making me an IRA sympathiser in the minds of its readership and thus a legitimate target for sectarian violence in Scotland. Later the same day this vicious lie was picked up by The Herald – a paper known to be connected to the British secret services, and the following day The Scotsman newspaper repeated the lie and tacked onto it the vindictive and false assertion I was a Holocaust denier – an accusation designed to wreck my academic career.


Yes Eastwood has cancelled its #JeggitOnTour talk on Wednesday 6 March - "I don't know if you know Eastwood, but it… twitter.com/i/web/status/1…

The purpose of this broad-based media assault was clear; it was an attempt to at once smear the Scottish National Party with links to violent extremism and rancid neo-Nazi opinion, and to put an end to my talking tour before it began. Sadly, the SNP complied and folded like a red-hot Mars bar – once again, putting a squeaky-clean reputation before the truth. Yet, I came to Scotland expecting nothing less. In fact, I was surprised to took the unionist-aligned media as long. But they made a massive mistake. Had these compromised reporters bothered to do their homework, they would have seen my credentials. Never have I hidden my Christian faith and my pacifism. Any amount of research would have shown them my involvement in the peace and reconciliation process in Ireland and my work for peace and non-violent resistance in Palestine. Google would have been happy to tell them all about my academic work on the horrors of the Holocaust and my decade-long participation in inter-faith dialogue in the International Council of Christians and Jews in Dublin and Heppenheim, but these reporters and their unionist papers were never interested in the truth.

Oh, but the damage has been done. This is the function of the British press. It manufactures the ammunition for its foot soldiers and their faux outrage is weaponised to spook the horses of the independence movement – and, by God, the horses are spooked. But there is no mistaking that we have allowed this to happen because our chief instruments are in a poor state of disorder. We have never been able to find the backbone to stand up to the lies, and this failure – and it is a failure – has left no small number of our champions exposed. Unless we address this serious fault, we will remain as we are – in no fit state to mount and win an independence campaign.

We are weakened by this prevailing middle-class opinion that we can succeed using England’s Queensberry rules. The Scottish independence movement is a threat to the British state and London will fight us with every disgusting perversion, lie, and violence it can muster. It will change the rules to suit its own purposes at every turn. Its papers will tell lies, twist the truth, blacken us, and criminalise us. They will, and without conscience, put in print lies that will see us mobbed on the pavements and soon enough – if we do not wake up – drowning in pools of our own blood on our city streets. Not even at this will the British state stop. When independence is all but won, the British state will unleash brutal and violent forces of oppression and repression we can scarce imagine. And if you think we can avoid this by playing by their rules, you are a fool. There are no rules.


"And I say to my people's masters: Beware! Beware of the thing that is coming, beware of the risen people, who shal… twitter.com/i/web/status/1…

Preach love and peace! England is a monster, incapable of understanding the raw power of love and peace – a power capable of bringing a nation together and forging such bonds of unity no power of hell can overcome. Trust me when I say it, I’m robed in red – let them who have ears understand, and I have great faith in the saints and martyrs, and chief among them one Padraig Pearse, the pedagogue of Ireland who wrote:

It does not suit the [British] government that peace and goodwill between Catholic and Protestant should be preached in Ireland,

Still, even his message of peace and love in Ireland – one Ireland – was said by Great Britain, the great divider, to be extremist, hate-filled, and violent. He too was robed in red, his reward – to be put against a wall in the stonebreakers yard of Kilmainham Gaol and shot on a beautiful Irish May morning. His martyrdom, like that of his brothers Thomas Clarke and James Connolly, was the crack of dawn for Ireland’s freedom, it’s bright, brand-new day. On the morning of 3 May 1916 Pearse knew, as he always had, that England would never play by the rules.

England will not play by the rules. Call it what you will – Britain, the United Kingdom, the beast is the same. England will never play by the rules; not in Ireland and not in Scotland. And for saying this – for stating the bloody obvious – they call me “Marmite.” Still, Scotland is a nation which, as it will readily confess, lives in ignorance of its own history, and if it does not know its own how can it know better the story of Ireland? How can we Scots so ignorantly believe Ireland’s story is not Scotland’s? The foe is and was always the same – England: a brutal, vicious, and violent imperial monster. Scotland, the time has come for you to wake up. You are the land of a rising people. Listen well to the lesson of Ireland – the land of a risen people, you must now get up off your knees. Your freedom will never be given. Your freedom must now be taken. Is this too frightening for you?

The Words of Patrick Pearse