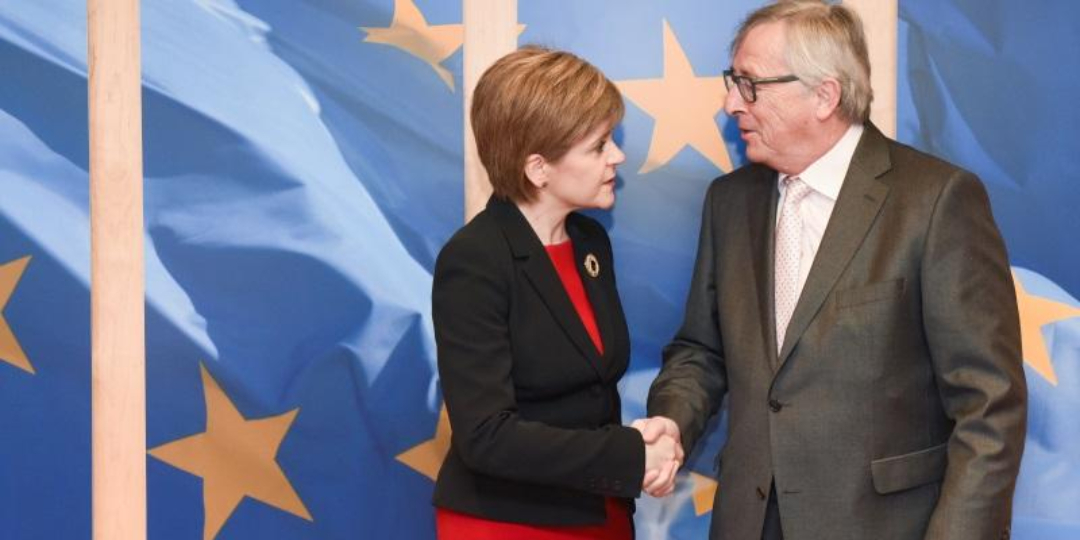 EXACTLY NOTHING of the 585-page proposal put to the European Union by the British government last week can be described as Theresa May’s deal. It isn’t even the British government’s deal. This is not the result of the whittling down of two opposing original positions by negotiation. The proposal is not a compromise. From the moment the British government sounded the Article 50 klaxon the EU has been clear that it stands behind Ireland and that there will be no compromise on the Irish border. The document delivered by May shows there has indeed been no compromise on the Irish question, this proposal is an absolute capitulation to Europe’s terms and conditions.

Theresa May, the British Prime Minister, has done the sensible thing. She has shown a willingness, in the face of considerable resistance from within her own party, to play ball with the only option on the table. She has managed, with a few high-profile resignations, to get approval for the proposal from her Cabinet, and it is likely – given that it meets the EU’s conditions – it will be accepted in Brussels. The real test, however, will be getting it through the Commons and this will not be easy. The calculus at Westminster is, at first glance, very much against her. She can kiss goodbye to any support from the DUP. The proposal crosses the Ulster unionists’ most sacred red line, compromise on the British border in Ireland. At a minimum she will lose 30 to 40 votes from her own backbenches; the split in the Conservative Party continues and the hardline Brexiteer faction – a gaggle of diehard British nationalists – will settle for nothing short of the hardest possible exit.


My #Brexit prediction? Having called the ERG's bluff, Theresa May will survive & UK will exit EU under the terms o… twitter.com/i/web/status/1…

Getting the proposal through the Commons will require 325 votes. Before this crisis the government had, together with its confidence and supply purchase, a majority of one – with 326 seats. It no longer has this. With a conservative estimate of losses, the government’s vote is reduced to about 276; that’s 50 votes shy of the majority it needs. So, can this vote be passed? Of course, but nothing is guaranteed. We can exclude from the equation Sinn Féin’s 7 seats. The Irish republicans refuse to take their seats in the British parliament. This brings May’s shortfall to somewhere closer to 40-45 votes. In October 8 Labour MPs said off the record to the BBC they would consider supporting a deal, but in the main the Labour position has been to vote down the deal in the hope of forcing a general election. But the problem here – for Labour – is obvious; not everyone in the Labour parliamentary party wants a general election at which Jeremy Corbyn might be elected Prime Minister.

Knowing that this is the only deal available as the clock ticks closer to an automatic no-deal nightmare Brexit, and not willing to see Corbyn in Number 10, it is conceivable there will be a number of pro-Brexit and anti-Corbyn defections to the government from the Labour benches. Corbyn himself, a Brexiteer, may even vote with the Tories. It is not impossible that that number, whatever it proves to be, will be enough to carry the deal through. The SNP and Plaid Cymru, with a total of 39 seats, are unlikely to “support the Tories,” but such a position, in my estimation, is blinkered. Tories will be voting on both sides and, moreover, this is not the Tories’ vote. This is the EU’s vote. As Brexit is going ahead regardless, this proposal promises to deliver the only conditions acceptable to Brussels.

Scotland voted 62 per cent Remain in the 2016 referendum, thus rejecting Brexit. It would then be consistent for the SNP in Westminster to abstain, refusing to coöperate with any pro-Brexit policy decision put before the House. Every abstention, however, is in May’s favour. It reduces the strength of the potential No vote. Though, since Scotland and Wales benefit nothing from the terms of the draft proposal, it is probable Plaid and the SNP will work to vote it down. But this may not be wise.

If it is the case the parliamentary arithmetic is against May, the SNP might well find itself in a position to work out a deal with the government. Trusting Theresa May – trusting any Conservative government, as the DUP has just learned the hard way, is not advisable. Therefore, any deal would have to be in writing and cast iron before it can be risked. But, notwithstanding this, without the votes she needs, Mrs May might well be desperate enough to strike a deal for votes with the SNP. Yet, no unionist Prime Minister would make a deal that would threaten the integrity of the union – but Theresa May is no unionist. This proposal is all about undermining the integrity of the union, as Arlene Foster and the DUP have discovered. The central feature of the proposal is about shifting the border in Ireland into the Irish Sea, effectively ending British rule on the island of Ireland. May can no longer claim her priority is protecting the union. A deal between the Tories and the SNP – on this one issue – is entirely possible and may prove to be to the advantage of both.

What are my own thoughts? In itself, the proposal is good for Ireland. As a Scot living in Ireland and as a card-carrying Irish republican, I want this deal. Ireland has not been this close to unification since 1921. That is 97 years of varying degrees of conflict in an armed independence struggle which has been ongoing from Easter week 1916. May’s proposal brings the island of Ireland within a breath of unity. Of course I want this deal. But I am also a Scottish independentista, and this deal is a minefield for Scotland.

On the one hand, by supporting the deal the SNP will be backing an arrangement that will put Scotland at a significant economic disadvantage in relation to the six counties – which will retain access to the Single Market. On the other, it ends the fictional notion advanced by the British government that the union is inviolable. As a working deal it is altogether likely it will create the economic conditions for independence – and, as we have seen in the Brexit referendum, Scottish unionists vote for what’s best for their bottom line. Whatever way the SNP handles this, the reality is that it is a massive gamble. But it remains the only offer.

One thought on “May’s Brexit Deal”