IN A RECENT ARTICLE addressing the inconsistent political thinking of Scottish independentistas supporting the English pro-Brexit #PeoplesVote campaign I drew attention to Tanja Bueltmann’s strenuous defence on social media of her support of the campaign and her decision to quote “the great Femi Sorry” in saying “We love the EU because we love the UK.” Coming from Bueltmann, an academic who is on record stating she believes independence is the best way forward for Scotland, it was clear from the start this was not going to go down well. She was going to get some flack. This was my criticism of her position:

We must be clear, the demand for a people’s vote is not a demand for another EU referendum. Those behind the campaign have made it clear that they accept the result of the vote. What they are looking for is a say in the final shape the United Kingdom’s departure from the European Union will take at the conclusion of the Article 50 negotiations. This means that the People’s Vote campaign is a pro-Brexit political position and therefore an English political position. On 23 June 2016 the people of Scotland voted 62 per cent in favour of remaining in the EU, making Remain the democratically decided sovereign will of the people of Scotland. Support of a pro-Brexit campaign, then, is wholly inconsistent with the campaign for independence.

No sooner had this article done the rounds on social media than People’s Vote supporters began taking issue that I “went for a woman.” Out of left field – as this is how trolling works, that Ms Bueltmann happened to be a woman, my criticism of her had to be somehow about me being a “misogynist” and a “sexist bully.” Former UK government negotiator and anti-Brexit campaigner Steve Bullock tweeted at me:

Odd that you went for the woman who retweeted the comment your headline alludes to, rather than the man that made the comment or any of the other speakers.

Why was that? Why was I interested in Tanja Bueltmann and not Femi? Simple: As a Scottish independentista who writes a pro-independence blog and who contributes pro-independence articles to a pro-Scotland magazine, I have no interest in Femi. His politics – English and anti-Brexit – are foreign to me. I couldn’t care less what Femi says about Brexit in the context of English politics. Besides, he has since taken to social media to explain his thoughts on Scotland, saying that “Scotland voted not once, but twice in the space of two years to remain an EU country.” He’s right, we did – and that is the sovereign will of our country.


@Jeggit @markrowantree Odd that you went for the woman who retweeted the comment your headline alludes to, rather t… twitter.com/i/web/status/1…

The focus of my criticism was on Bueltmann, not because she was a woman, but because she is – or was – an independentista. She did not, as Steve Bullock wrongly said, retweet what Femi said about loving the UK. She quoted it in her own tweet in a laudatory tone that make her agreement apparent. Those of us in Scotland seeking independence will say it to a woman with the same force we will say it to a man – mainly because we aren’t sexists: We do not love the UK! Seeing this retweeted, quoted, or otherwise said or promoted by anyone claiming to support independence will provoke a backlash. It is astounding that Ms Bueltmann never saw this coming.

Yet, rather than acknowledge the upset her words had caused, and rather than do what Femi did when he explained himself, Tanja Bueltmann decided to hide behind the dishonest and cowardly – taking to Twitter to make sure her followers read my criticism of her bad thinking as a sexist and misogynistic attack. Her closing comment, addressed to me, in a thread about what I had written about her – which was all rather strange considering she has locked her account, meaning I had to ask others to screen grab her rant – was most interesting:

And Jeggit I hope you don’t think that you get to speak about my vagina without getting a block. Undoubtedly you’re going to use that against me too.

Oh yes, Tanja. I am definitely going to use that against you now. 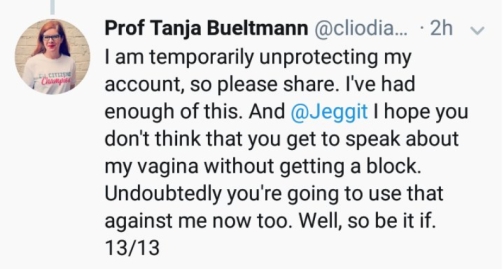 The “vagina” comment: One of her supporters on Twitter, a certain Stevie – a Corbyn based lifeform and a #FBPE cyber trooper, came to her defence with the words “Big brave freedom fighter attacking the woman who loves her adopted home.” Here two things were being weaponised; Bueltmann’s sex and the fact that she is a migrant. Apparently, according to Stevie and a few dozen other Brexiteers – yes, People’s Vote Brexiteers, women and immigrants get a free pass when it comes to being inconsistent. The assumption here, of course, is that women and immigrants aren’t as smart, and so ought to be afforded some leeway. But this is the real misogyny and racism. I don’t buy it. Bueltmann holds a doctorate and is a professor of history at Northumbria University. So, no. I happily subscribe to the idea of the intellectual equality of the sexes.

To make this clear to Stevie, I responded:

This big brave freedom fighter was pointing out her logical inconsistency. A vagina and migrant status do not protect people from criticism.

Now, just to set the record straight; I have no interest in Tanja Bueltmann’s genitals. She’s safe enough. Besides, “a vagina” – not her vagina – should have been sufficient for a professor to realise I was speaking generally, and I hold to this – albeit without the choice vocabulary; being a woman or a migrant does not exempt a person from valid criticism.

The criticism could not have been clearer. It is not possible for someone to support Scottish independence – fighting for the sovereignty of Scotland, a nation that overwhelmingly rejected Brexit – and be a People’s Vote campaigner – an acceptance of the subservience of Scotland’s will to that of England. This is a contradiction. But rather than addressing this in her devious thread, she chose to invent a situation in which I was abusing her for being a woman. That is disgraceful. This form of weaponised imaginary victimhood, used as an instrument to deflect honest and open discourse, is precisely what we are fighting against in Scotland. It is manipulative, intellectually dishonest, and cowardly. Scotland deserves better than this.

11 thoughts on “Dishonest and Cowardly Behaviour”