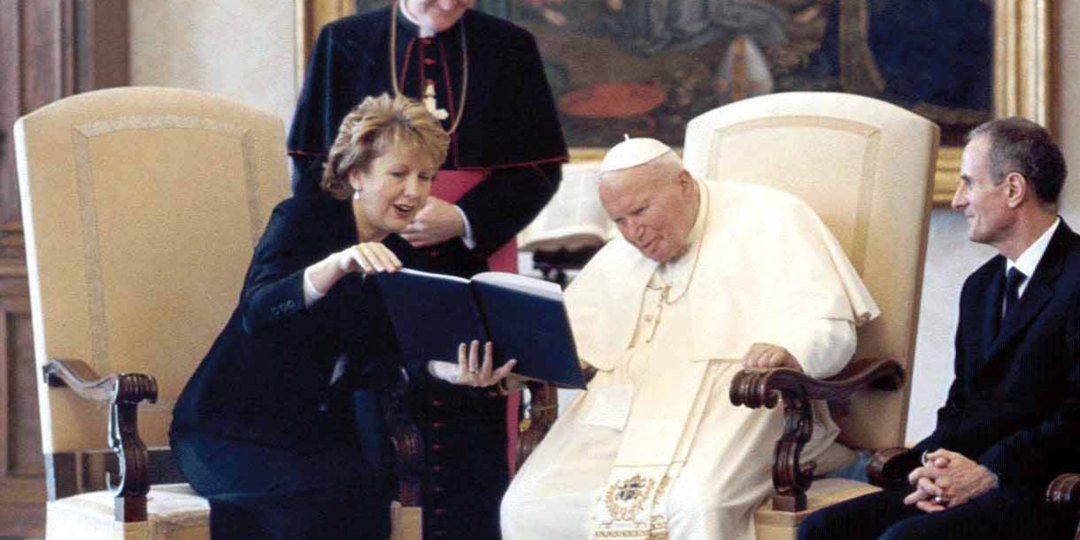 Former President of Ireland Mary McAleese has opened fire on Pope Francis and his upcoming papal visit to Dublin. Speaking on the Marian Finucane Show on RTÉ Radio 1 she described the World Meeting of Families – the reason for Francis’ visit – as “essentially a right-wing rally,” lumping everyone who’ll be travelling to see the Pope and attend the closing Mass in the Phoenix Park in with people like Donald Trump, Steve Bannon, and alt-right leaders like Richard Spencer. According to Mrs McAleese the World Meeting of Families was:

…designed for that purpose, to rally people to get them motivated to fight against the tide of same-sex marriage, rights for gays, abortion rights, contraceptive rights.

Admittedly, Mrs McAleese has a certain degree of competence when discussing issues facing the people of Ireland and matters concerning the Catholic Church. She was the President of Ireland from 1997 to 2011 and she is a qualified canon lawyer – she knows what she’s talking about. But this doesn’t mean she is right to describe the Church, its leadership, or the activities of the Pope as right-wing because they happen not to chime well with her own particular political position. Even her decision to study Church law points to a level of confirmation bias in her outspoken attitude towards the Catholic Church. When asked why she wanted to study canon law she openly conceded that she was motivated by hostility. She was suspicious of the Church’s intentions.


Expect an avalanche of attacks on the Pope/Church this week. In the local forefront, vying with other malcontents -… twitter.com/i/web/status/1…

We can’t defend the indefensible. The Church in Ireland and all around the world failed children and vulnerable people. There was – and to a great extent remains – a culture of abuse within the structures of the Church. The sexual, physical, and psychological abuse of children in the care of Church authorities was a terrible wrong, but the scandal was far worse; it was the abuse of power on the part of an ecclesiastical hierarchy that protected abusers and covered up their abuse – often shielding them, by the use of canon law among other things, from civil justice.

Mary McAleese, the people of Ireland, and everyone aware of this scandal – especially Catholics, have a right to be enraged by this. They have a duty to speak out. In fact, and in perfect accord with the teachings of the Church on the informed conscience, they always had a duty to speak out. This brings me to my first criticism of Mrs McAleese’s outrageous remarks: As a lawyer, a professor of criminal law, and as the President of Ireland – in a country where child abuse was common knowledge – Mary McAleese said nothing when she was in a position to do something about it. Sure, it is all very well, at the end of one’s career, when one has little to lose, to speak bold words and make sweeping condemnations. But the fact remains, Mrs McAleese has decided to speak out only at the epilogue of her career in Irish public and political life.

By no means is this intended as a condemnation of her in particular, her silence was a symptom of a profound sickness in Irish society that transcended the Church. This sickness is still pervasive in Irish society. One need only look at the indifference of Ireland’s ruling class towards the homeless and all those – Travellers, immigrants, people in Direct Provision etc. – on the peripheries of our society. Priests and religious abusing children and people in their care and the bishops, archbishops, and cardinals putting the bona facia of the Church before the well-being of the victims were not aliens; they were not foreign invaders. They were the sons and daughters of Irish mothers and fathers – they were the product of Irish society as much as they were the product of the Church.


Kinda miffed that our taxes have to pay for 12m of this Papal visit when his institution has refused to compensate… twitter.com/i/web/status/1…

While the totality of the focus of modern Ireland remains on the Church and its hierarchy, nothing is said of the mothers and fathers, the magistrates, the justice system, the Gardaí and its members, and the innumerable teachers and social workers who used Church-run institutions as instruments to remove the unwanted from Irish life. It was not the Church that beat and delivered the unwed expectant mother to the Magdalene Laundry. No, that was on the family; a family that was ashamed of its own daughter. Let’s not go down the idiotic route of suggesting the fathers and mothers, judges, police, teachers, and so on who did this had no say in what they were doing; that they had no agency in the decisions they were making. This was a new Republic born out of its struggle against the British Empire. The people of Ireland – the people who were doing this – had minds of their own.

The Church was in the wrong, for sure. The crimes it committed against innocents were deeply sinful, but this was not a “Roman” Church – it was the Roman Catholic Church in Ireland, the product of a very Irish clerical imagination. Of course, both in Ireland and in Rome, the Church bears responsibility for this and must apologise and seek forgiveness for the sins of the past. No one is denying this – not even the Pope. But we cannot fail to see in this climate of open season on the Church something of a scapegoat mechanism at work. This was not the doing of the Catholic faith. It was the doing of an all too human religious institution made up of the sons and daughters of Ireland. By keeping the spotlight on the Church today who are we trying to protect?


May the Holy Spirit grant us the grace of conversion and the interior anointing needed to express before crimes of… twitter.com/i/web/status/1…

Nothing good can come from this desire to scapegoat “the Church.” Unlike many more recently developed religious communities, Catholicism – like Judaism and Islam – is more than a religious practice. Since the fifth century Catholic Christianity has been enculturated into the fabric of the Irish identity, making, even in this more secular age, the majority of Irish people at least culturally Catholic. It is a way of thinking, behaving, and sharing in community that is distinctly both Irish and Catholic. Through history it has been a rallying point of identity and a locus of resistance. Like it or not, this Catholicism has shaped what it means to be Ireland and Irish like no other historical or cultural force – to the point that to think of Ireland without its effects is impossible.

Thus, to write off “the Church” as some monolithic foreign imposition is to negate in its totality what it means to be Irish – and one does not need to be religious to accept the truth of this statement. More still, the now incessant assault on the Church and Catholics on the grounds of past wrongs – assuming this is all Catholicism and Catholics are about – will not cure the sickness. The misdeeds of the Irish Church are not the cause. They are a symptom. By continuing to attack Catholics – and indeed all Christians and people of other religious faiths – people like Mary McAleese are not remedying the problem. They are making it worse. Religious Catholics, finding more meaning in their faith than in a society they see as one in a new Dark Age, will only become firmer in their adherence to the institution; thus moving them to the right and making McAleese’s words a self-fulfilling prophecy.

Sex Abuse Survivor To Church: ‘Tell The Truth Once And For All’