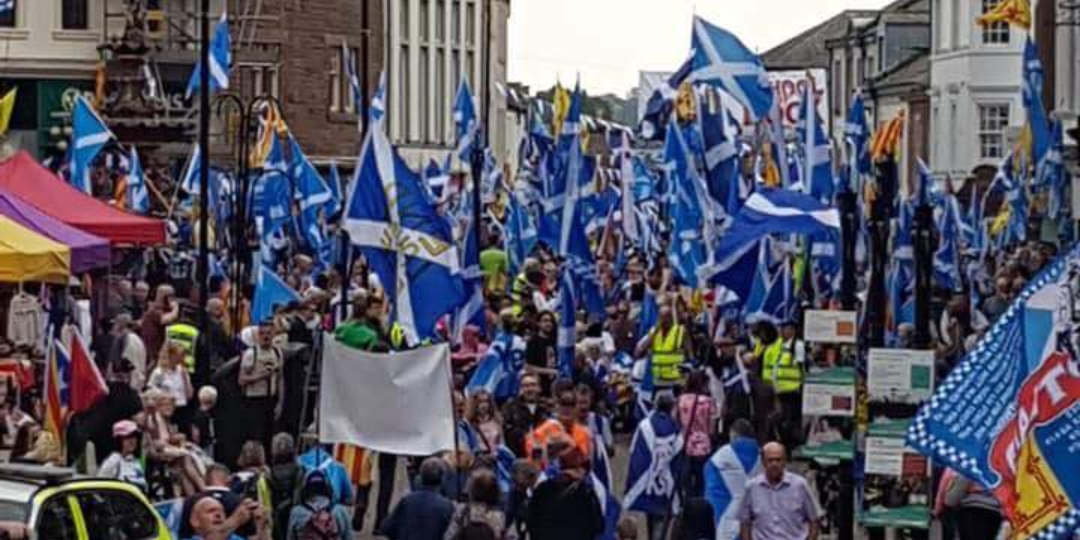 Join the March to Independence

It’s time we stopped listening to the naysayers and realised that the pro-independence march and rally is the truth of our movement taking a stroll.

Why is it that so many in the independence movement feel the need to preface comments on pro-independence rallies with the words: “I’m not one for flags and banners but…?” It would appear to be the case that many of us have, at some level, bought into the “flag-waving nationalism” narrative of the unionists. There is nothing wrong with waving flags and going on marches to show our support for a cause. In fact, outwith the Yes movement, flags and banners are quite normal. In everything from sport, through political campaigns and demonstrations, to pro-democracy and secessionist movements – the world over – flags, banners, marches, and rallies are the done thing.

On Saturday somewhere in the region of 10,000 people walked through Dumfries – Dumfries. Not Glasgow or Edinburgh, but Dumfries – in a pro-independence rally described by the police as orderly and in good humour. Unionists in the media and on social media were quick to dismiss it, yet again, by banging hard on the “flag-waving nationalism” drum, but managed – of course – not to mention the minuscule unionist counter-demonstration complete with union flegs and Nazi salutes. So tell us again, why should we be shy about our orderly and good humoured marches?

Our reticence is always infused with the same shallow arguments: Marches alone achieve nothing; we’re not winning over people who voted No in 2014; these rallies only attract the fringe nutters of the Scottish Twittersphere. What a complete and utter load of tosh these naysayers talk! The purpose of a rally is not to “achieve” anything. Civil rights marchers and anti-war demonstrators have always known their actions wouldn’t win over their oppressors, the warmongers, and the arms dealers. And as for the lunatic fringe on social media, who exactly made these people the guardians of the internet and the gatekeepers of who is and is not part of this movement?

No one raises an eyebrow when thousands of women’s rights demonstrators march on Glasgow or Edinburgh demanding that a woman’s right to be treated equally and fairly in society be respected. Don’t they wave flags and banners? The same for anti-racism marches, trade union demonstrations, and anti-austerity protestors. Why then must the goalposts be shifted when the feet on the street are demanding the right of their nation to be free? Stop listening to these people. They are idiots.

Marches alone achieve nothing – possibly true – but they are not useless. Far from it! As an outward and visible expression of democracy the march brings people; who are otherwise isolated by the continual misrepresentation of the movement by the establishment, together. Every single person who joins the rally, wherever it happens to be, empowers others – who might have felt they would have been out of place – to come along. Pro-independence rallies – especially of the size we have been seeing – serve to remind us that we are not the fringe the media wants us to believe we are, and they take from that media establishment the ability to be believed when they tell the rest of Scotland we are defeated and on the wane.


Aye, the Yes movement is anti English and horribly racist 😂😂 Anyone ever say that to you, show em this photo! https://t.co/RZM73acErY

More importantly the march or the rally raises awareness of the issues of the cause. People not on social media, in an environment where all other sources of information are against us, are introduced to the thought leaders of the movement and women and men of the same mind from all over the country. Where the talking heads on the television are want to paint Scottish “nationalism” as xenophobic, populist, right-wing, and anti-English, the rally puts the lie to it. “New Scots” from every corner of the world are there with their saltires, English Scots for Yes have their banner and their English football jerseys on. The march is the truth of our movement taking a stroll.

No one is suggesting – no one has ever suggested – that marches on their own will win independence. That’s not the purpose of the march. But we should bear in mind that neither will voting alone win us our independence. Had that been the case there would be no need for campaigns. We would simply set a date and expect people to turn out to vote. Winning a referendum calls for so much more than a polling day and rallies. All of these things, together with small local groups, magazines, blogs, posters, social and political pro-independence activism, and more, work together to transform and empower those already on our side and draw in support.


Here in the heart of this Conservative constituency a total of 15 unionist protesters, singing Rule Britannia and h… twitter.com/i/web/status/1…

When we repeat this narrative that says our marches are silly we only reinforce within our own ranks that they are indeed silly, and so ultimately they become silly because we believe them to be so. What we are doing is anything but silly. We are engaging in real democracy like a grownup society, and we are doing a bloody good job of it. When old folk in wheelchairs and toddlers in buggies are being wheeled past thugs giving fascists salutes with thousands of others on a Yes march, without even a hint of trouble, then we know we are doing it right.

At Dumfries on Saturday the good people of the town who chose the union and lent their vote to the Tories got to see first-hand the good nature of the independence campaign. It filled up their hotels and restaurants, the chippers were queued out, and the pubs were jammers. They saw smiles, they heard laughter, they saw people from all over Scotland come to their town, and they were included in these people’s courageous vision for Scotland – and for Dumfries. And up at the Burns monument in their town they saw their unionism; fleg-waving nationalism, complete with Nazi salutes.

8 thoughts on “Join the March to Independence”