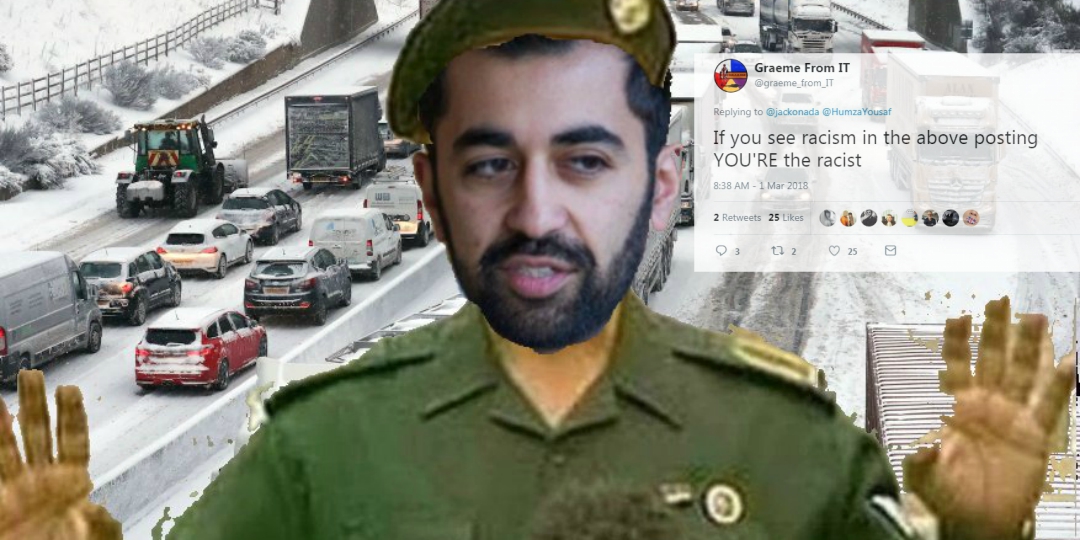 No comment on Humza Yousaf on the yoon-stream ever lacks some open or veiled reference to the colour of his skin or to his religious or cultural background. There appears to be something poisonous in the unionist imagination.

In our house the snow day snowball fight used to always begin with our papa jokingly telling us to “mind and no eat any yellow snow.” That was great advice, but it seems every snow day has its wee patches of yellow snow and today was no exception. It was predictable. Not content simply to heed the warnings to avoid all unnecessary travel and stay at home and enjoy the wintery wonderland the “beast from the east” has brought us, the British nationalists were out in force; directing the ugliest racist abuse at Humza Yousaf the Transport Secretary.

Yousaf’s parents came to Scotland in the 1960s; his mother from Kenya and his father from Pakistan. Humza Yousaf is brown and, in spite of the British nationalists’ claim that Scottish independence supporters – the very people who vote for Yousaf – are “nasty Natsis,” those who don’t like his politics, the moment they feel justified, get straight to the racism. The moment the first flurry of snow fell independentistas all over Scotland began the countdown and, of course, this was exactly what happened. It happens every single time. They can’t help themselves, they are nationalists.


I have a union jack on my Twitter handle and I can't get my car out the driveway. Time to tweet Humza Yousaf some racist drivel.

In the early days, more especially around the time of the 2014 referendum, such attacks were absolutely transparent in their racism, often employing the horrific and vile British racist slur “Paki.” Since then, however, and because even most of their fellow unionists are disgusted by their open racism, these lowlifes have discovered ways of coding their racism – much like the Alt-Right has in Trump’s Ameri-KKK-a – into “jokes” and “edgi” memes. In the US the creators of these coded memes will ask: “How is a drawing of Barack Obama eating a watermelon racist?” It’s only a man eating a piece of fruit. Offence is taken, not given.


Humza Yousaf says we should join in the quota of migrants...Paki half wit! #SNP

But the image of the “nigger” eating watermelon has a long and ugly history in America’s racist discourse, so the reproduction of this stereotype as a statement on the United States’ first African American President is sending a loud signal to those who understand it. This is the art of the “dog whistle,” and it is not absent from similar jokes and memes directed at Humza Yousaf.

No government minister with responsibility for the transport infrastructure anywhere in the world has godlike power over nature. Rain, hail, and snow happen. This cold snap we are experiencing has brought transport services and traffic to a standstill all over Scotland, Ireland, and parts of England. Humza Yousaf, like his counterparts in Ireland and England; Shane Ross and Chris Grayling, has no control over the weather, and sometimes things do go wrong. Sometimes ministers make mistakes. It’s no surprise traffic on the M80 slowed down, and if Yousaf got it wrong then, fine – tell him he got it wrong. I’m pretty sure that if that was the case he already knew.


Humza can confirm that the M80 has had no problems overnight and is running fluently. In fact there has been no sno… twitter.com/i/web/status/9…

But rather than commenting that perhaps a mistake had been made, that the traffic was maybe bogged down in heavy snow and poor visibility – as sometimes happens, the racists – feeling emboldened – came out from under their rocks. Their criticism of him was not that they felt he had made a blunder, but that he was like Ali Hassan al-Majid (“Chemical Ali”), the former Iraqi Minister of Defence under Saddam Hussein. Defending his use of this racist meme, “Graeme From IT” asked: “Can you show me what language I have used is racist?” and added that “if you see racism in [this] you’re the racist.” It was interesting that Jill Stephenson, the often racist and bigoted former University of Edinburgh History lecturer, liked this comment.

Well nothing that Graeme said was racist. He’s playing the game. His racism, like the racist watermelon references across the water, is encoded in the image. Chemical Ali – or “Comical Humza Yousaf” as Graeme labels this image – is a symbol of Middle Eastern tyranny, and as such plays on the white supremacist trope of the Crusades – a symbol also used by the Nazis. It is a holophrastic reminder in that it is a visual cue pointing to a whole package of meanings. This is the enemy; the dark skinned Muslim enemy who poses a threat to “our heroes” – our white, Western, Christian, crusader heroes. There is no mistaking why this image was selected. Why would a brown skinned Muslim Transport Minister remind these people of Chemical Ali? Why does it have to be a military leader of an Arab country Britain has illegally invaded, defeated, humiliated, and occupied? Of all the available blunderers, why this one?

Well, no, it is not racist to point this out. We see what you did there Graeme From IT. We get it! Yet when Jeff Dugdale – Kezia’s independentista dad – called it out Graeme screamed back: “It was a JOKE!” Aye, everything racist on the internet is “a joke” – just a joke. But “the joke” too, like the coded racist meme, has a long history – as we all know – of being a conduit of racist opinion, a method of abuse, and a means of building racist communities. A Google Scholar search for “racism as a joke” produces no less than 78,000 academic papers on the subject of describing racism as a joke. So we can be quite confident to call these people out for their racism.


An instructive evening with English left. The kind with ‘Manuel’ jokes for the Spanish. And these are Remainers! #whythefuckamIevenhere

This, once again, cuts right to the heart of what British nationalism is all about. This is a hate-filled ideology built on a sick and distorted memory of what Britain was in the past. The use of this totem of Britishness now by these racists is a claim to legitimacy. They are trying to legitimise their attempt to dig the corpse of old Britain up from its grave and relive the glory days of good humoured British imperial white supremacism and racism. What else can explain the popularity of the picture of Alf Garnett as a profile image in the British nationalist online community? Well, like Warren Mitchell – Till Death Us Do Part – that Britain is dead, and long may it rot.