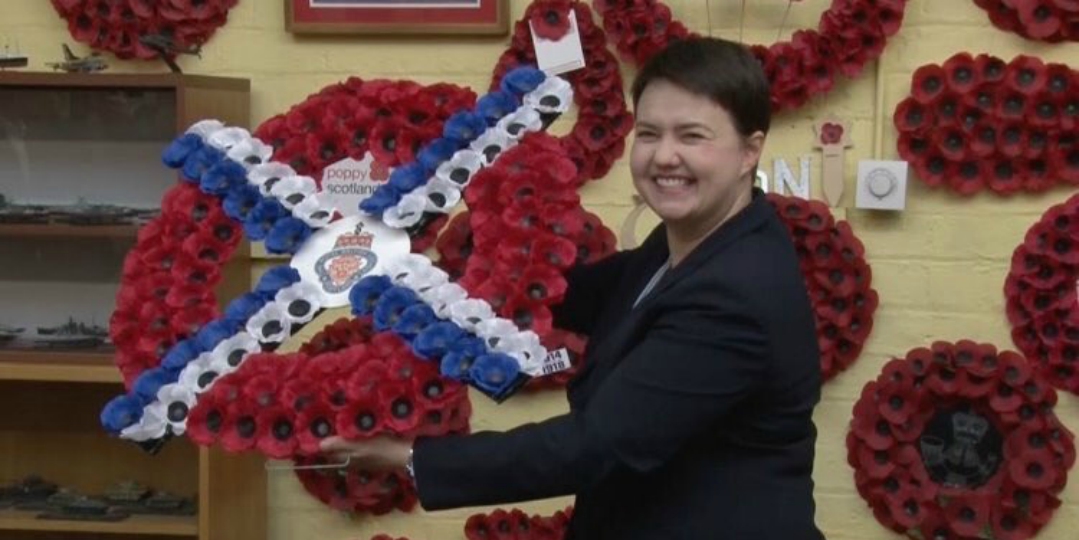 Poppy Scotland: a Tory Shell and a Unionist Shill

Thanks to the Scottish Conservatives and their complete lack of discretion we now know the truth about the poppy and the supposed neutrality of Poppy Scotland. It is what we always knew: a unionist symbol of war.

“State of this,” tweeted Mr Malky, Aberdeenshire’s indy cyber-watchdog, when Conservative MP John Lamont broadcast on social media how apparently the Scottish Tories have delivered for Scotland after securing £2.5 million in funding for the “apolitical” charity Poppy Scotland. It quickly became apparent this politicisation of the charity – which vociferously promotes itself as politically neutral – was part of a Tory strategy. Scottish Conservative politicians all over the country were sharing the same image and text on their social media pages.

Stuart Campbell on Wings Over Scotland observed how this weaponisation of the charity by the Tories functioned as a threat. “What it unmistakeably implies,” he wrote, “is that if Scotland had voted for more SNP MPs in June… the UK government would have retaliated by spitefully punishing innocent war veterans.” Yes, this is precisely what the Conservatives were saying – forcing us to question the charity’s claim of being a politically neutral organisation. To its credit Poppy Scotland took to Twitter immediately, stating that it is not “responsible for the twitter comments of others, but anything that brings [its] apolitical status into question is unhelpful.”

Those of us critical of the cynical use of the poppy as a recruitment tool and as a means of ramping up militaristic British nationalist sentiment have found ourselves under serious fire for daring to question the neutrality of the symbol. With the obvious exception of elected right-wing unionists, people are expected to meekly accept the unassailable truth of the poppy as an emblem of remembrance for everyone who has died in all wars.


State of this @WingsScotland https://t.co/MGufYGfzIL

This truth has, since Field Marshal Haig – a donkey whose “pig-headed” stupidity cost the lives of 250,000 British soldiers at Ypres – pinched the idea from Frenchwoman Anna Guérin, been a piece of nonsense. Britain’s poppy has never been a neutral symbol. It has never, for example, been used to remember the fallen of the German, Italian, or Japanese forces. In Ireland – despite the now proven aggression of Britain in that country’s Troubles – it has very much become a sectarian rallying point, a weapon in an ideological war. However the charitable organisation presents it, the poppy itself all too often takes on a partisan meaning.

Surely this is not the case in Scotland. Here people actually do wear the poppy to remember the service of their family members in past wars, and this is true. Such symbols will always have a surplus of meaning. The wearing of it in genuine sympathy with women and men who have served their country and done their families proud is no bad thing. In this regard people on both sides of Scotland’s political divide wear the poppy.

But there is how people wear the poppy and there is how the promoters of the poppy see it, and these are two very different things. Those who promote the idolisation of the symbol and its many meanings; from the highest offices of the Crown to the bosses of Poppy Scotland, well understand the power this symbol has in shaping people’s political opinions. It is in this regard that the poppy is, as it has always been, an instrument of unionist power in Scotland.


@MrMalky As a veteran, it grieves me to say that the donations I have made every year for the last 50 years have now ended

Take for example 69 year old Alistair Irwin, former commander of the 39 Infantry Brigade in Northern Ireland. Irwin, or “Lieutenant General Sir Alistair Irwin KCB CBE MA” to us mere mortals, is the current president of Poppy Scotland. Naturally it makes sense that an organisation committed to the care of veterans should be presided over by someone who has him or herself served, but wasn’t this all meant to be about the futility of war and about the promotion of peace? We get easily confused. No, Poppy Scotland is not about peace. It is about honouring the high and noble willingness of women and men to offer themselves upon the altar of war. War – “the continuation of politics by other means” – is always political.

It stands to reason then that Alistair would himself be a political man, and by God he is. This man, while occupying the highest office of an “apolitical” war promotion organisation, sits on the advisory board of Scotland in Union – the anti-independence and most definitely politically partisan unionist successor of Better Together. So here we have a politically motivated unionist with extremely significant political connections to the British politico-military establishment who had a distinguished career in a dirty – and very political – war in Ireland heading up the “apolitical” Poppy Scotland organisation. Okay, we can drop the irony. Poppy Scotland is as politically neutral as the poppy itself – and by that I mean, not at all neutral.

We can appreciate why the leadership of the Scottish National Party elect to wear the poppy, as we can accept – however much it affronts many of us – why they swear an oath of allegiance to the matriarch of the Saxe-Coburg und Gotha family and to her heirs and successors. The SNP must play both sides to grow support for independence. That’s politics. But it is time we in the wider independence movement woke up to the poppy; an instrument in Britain’s battle for hearts and minds every bit as potent as the Crown and the butcher’s apron.

Remembering the sacrifice made in war and the suffering endured by those caught up in war is important. Of course it is. But there are other – truly politically neutral – ways to “remember.” Scotland lives in the shadow of London’s supreme glorification of war and destruction – the world destroying weapons kept on the Clyde. This gives us an immediate connection to the memory of Hiroshima and Nagasaki, terrible events which evoke a truer desire for the end of all war. The white poppy is powerful, but ultimately itself a reaction to the politics of the blood red poppy. I think, and this is only me, that if we want to remember and remember to make war no more then we might do well to start folding paper cranes.