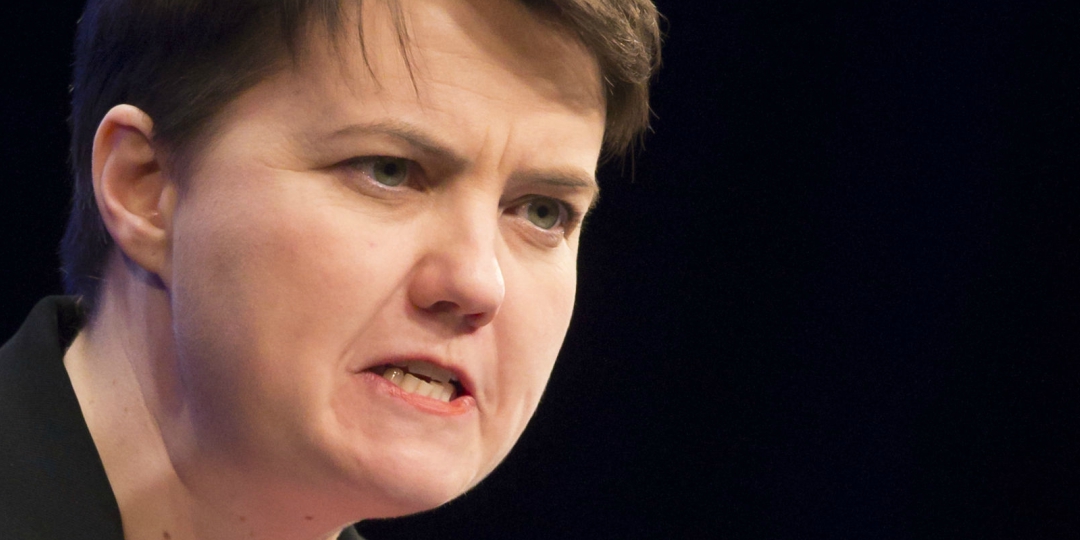 Ruth Davidson to Boil her Heid on Bake Off

Tory leader Ruth – “tank girl” – Davidson is set to appear on an episode of Channel 4’s Great British Bake Off. There’s nothing benign or neutral about this television appearance. It’s a volley in Britain’s media war.

“Davidson’s popularity is growing,” writes Caroline Davies in The Guardian. Well of course the Scottish Conservative leader’s popularity is growing. That’s what happens when the establishment media showcases political leaders on popular reality television programmes and constructs around them an artificial cult of personality. Face and name recognition are well understood in the world of politics, and they work. Considering that Labour in Scotland is to all intents and purposes defunct, Britain’s war against Scottish independence depends on the creation of a Conservative Party bleached enough to appeal to Scottish voters. This means giving the party’s leader a makeover.

Scotland, as a small northern European nation, is naturally conservative. Its rich industrial history has given Scots a deep sense of social justice and this, coupled with Scotland’s experience of London rule and Thatcherism, makes it almost impossible for Scotland to support the Conservative Party. It is no exaggeration to say that Toryism is muck in Scotland, with many Scottish people seeing it as essentially an English establishment party – not exactly having their best interests at heart. Given the Tories’ record, it is difficult to see much wrong with this assessment.

One of the greatest achievements of modern Scotland, thanks largely to the rise of the independence movement, has been the rejection of sectarian bigotry; long a blight on Scottish society. Devolution has given average Scots a better appreciation of the benefits of immigration for our economy, and this growing awareness has played a significant part in the erosion of racist assumptions and prejudice. The fusion of socialism and ideologies of national self-determination over the past two decades has produced a beautiful sense of inclusiveness in Scotland’s nationalist psyche.


@RTUKnews Sadly, I am no longer surprised by this now institutionalised racism. However, this is NOT the case in Scotland.

Scotland’s Conservatives, mired as they are in moribund British nationalism and unionism, have been unaffected by this transformation. In fact they have actively resisted it, finding themselves and their party very much on the wrong side of historical trends in the country. So deep-seated are sectarianism and racism in Scottish unionism and British nationalism that scarce a week passes without another public example of bigotry from some Tory politician. Ms Davidson even lied about sending councillors guilty of tweeting racist and anti-Catholic material to tolerance classes. Such things are just not a priority for these knuckle draggers.

But if Scottish independence is to be derailed, then the Tories and truthless Ruth are the best the British establishment have. So can we be surprised to see her on the small screen entertaining small minds with her buns? Absolutely not, and it is not the first time. Channel 4 is putting Ruth on a charity episode of Great British Bake Off. She was already on the spin-off An Extra Slice last year and previously appeared on the BBC’s Have I Got News for You.

Sure, there is nothing wrong with this – as the media is keen to impress on us. Lynsey Bews, writing for the Evening Edinburgh News, explains how Ed Balls, the former chancellor, and former Prime Mininsters’ WAGs Samantha Cameron and Sarah Brown have been on the show. But Balls, Cameron, and Brown weren’t in politics when they got their fifteen minutes. Putting an active politician – the leader of the Scottish opposition and a member of the party in government in London – on a popular show says something else completely.

Oh but it’s for a cancer charity! This means we should all calm down and chill out – It’s for the wains. Nonsense! Charity and the “charity sector” cover a multitude of sins. We all want to fight cancer, end world hunger, and save the whale, but charity – a multi-billion dollar industry paying grotesque salaries to its CEOs – is well known as a tool for whitewashing political figures. It doesn’t matter a hoot that this charity episode of Bake Off is for a cancer charity, people in politics should not be promoted by television programmes. It is propaganda and highly unethical.


@RedCross why does a charity pay it's CEO $500K with donated money? Where is the $300 million collected for Harvey?

According to the Soft Power 30, an annual index published by Portland Communications and the USC Centre on Public Diplomacy, the United Kingdom comes behind only France in the use of soft power. Scoring 75.72 on the one hundred point scale, the UK is a master when it comes to using culture as a means of achieving its political ends.

Television – that smooth, vaguely criminal BBC English accent, the repressed and cheeky sexual innuendo, and the fact that it is the “Great British” Bake Off (capable of causing national consternation when it was won by a woman wearing a hijab) – is an active ingredient in modern British soft power. Auntie Beeb, together with the lion’s share of the rest of the British media, is a powerful influencer within and outwith the United Kingdom. The lighting and the makeup department can make even ugly politicians like Nigel Farage look and sound appealing. Just guess what it can do for a pathological liar like Ruth Davidson and the Scottish Conservative and Unionist Party.

The terminology of “media war” does sound rather dramatic, and it is. But when we realise that many of the media skills learned by Britain were developed as methods of psychological warfare in Iraq and Afghanistan, this is exactly what it is – Britain’s media war in Scotland. Women are perceived to be less threatening in politics and it’s an added bonus she’s LGBT – not me being prejudiced, it’s how the media gauges how people on television will be received by the viewing public. Ruth – if they can keep the Tory thing out of it – is a winning formula.


Truth is UK Government has donated whopping 289 million pounds to BBC for 11 new programmes to project "its soft power". Connect the dotes..

Britain knows it is fighting an existential battle in Scotland, and since the 2014 referendum it has upped its game; ramping up negative stories on the BBC News, and flexing its cultural muscles on our television sets and on the radio. As pro-independence sentiment continues to hover between the 45 and 50 per cent mark, the media wing of the British establishment knows it must stem the tide, and it must do this by improving and strengthening the image of the Tories in Scotland. She will never appeal to independentistas, but they don’t care about that. Making her acceptable to unionist Labour voters is all that matters. This is what’s happening.

In fairness there isn’t a great deal we can do about it. We can stop imagining that by stamping our feet we will change the BBC and the bias in the establishment media. These opinion forming institutions were never intended as representative bodies. They were always instruments of the state, and – when the occasion arises – weapons of the same. It is important, however, that we are aware of what is going on. Maybe the time has come for the independence movement to pioneer a media awareness programme of its own to help ordinary folk decode the veiled propaganda and so become that bit more equipped to combat it where they are.