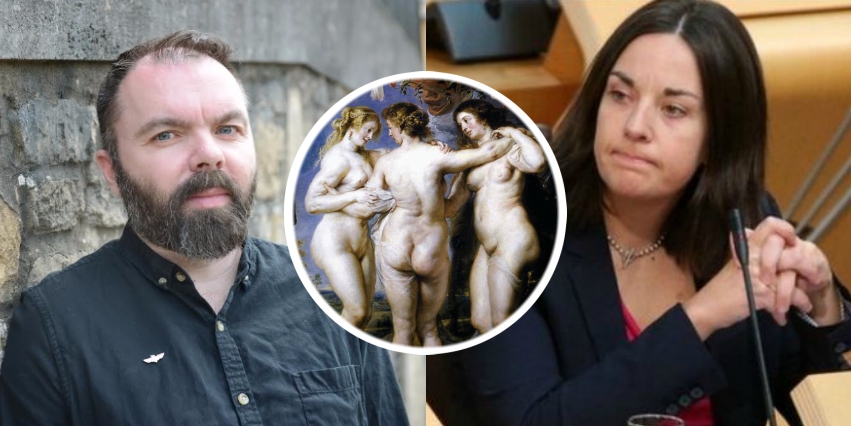 The question of what is and is not homophobia and sexism has come to the fore in the independence movement of late. Discrimination is discrimination, but injustice cannot be defined by the angriest and loudest voices.

We need to have a little chat about this culture of identitarianist, hair-trigger intolerant, easily offendedness masquerading as something new, brilliant and meaningful on the political left. Usually this is the calibre of self-involved blundering numbskullery at which I can roll my eyes and happily ignore, but recent events have really brought it to a head for me. Kezia Dugdale being lionised for standing up to the threat of legal action from Stuart Campbell of Wings Over Scotland after she “called out” his comments on Oliver Mundell as “homophobic” and me being called a “sexist git” for defending the creative direction of iScot Magazine’s August cover have pushed me over the edge.

As most of the people I am now venting about probably stopped reading and blocked me after the first sentence, we are safe to continue. Feminism and questions of equality are important. I’m not going to sit here and deny this. Women and girls get a shoddy deal in our society, as do people of colour, religious, ethnic, and social minorities, immigrants and refugees, and the elderly and disabled. In Scotland we have a job of work to do to change this and challenge the structures that perpetuate these objectively unjust realities. But this does not mean that sexism, homophobia, and other forms of discrimination are what the loudest and angriest people say they are.

I find characters like Milo Yiannopoulos, Paul Joseph Watson, and Alex Jones as objectionable as the next “leftist,” but I will also be the first to admit they often have a point. A broken clock is right twice a day. When they mock the “autistic screeching” of “feminazis,” “social justice warriors,” and “snowflakes,” they are more often than not pinpointing exactly what irks most rational people about these self-proclaimed champions of truth and justice. It can be argued, and I believe correctly, that this common distaste for the antics of the “lunatic left” is assisting the rise of right-wing sentiment. When the alt-right begins to make sense to ordinary working people, even in the smallest of things, we are in trouble.

Identity politics is killing the left. While individual freedoms and choices are integral components of the broader human rights and socialist political debates, the left – in the midst of the single greatest transfer of wealth from the bottom to the top in recorded human history – has thrown itself headlong into the politics of identity and individualism over class struggle and industrial and social solidarity. There are 100,000 fewer trade union members today in Scotland than there were in 1995, but there are more workers. Over the whole of the United Kingdom more workers every year are being exploited by zero-hours contracts and contract-less situations, working for less money in dirty, dangerous, and dehumanising “jobs.” Where are the unions? Where is the left?

Theresa May has made it crystal clear that her intention is to further streamline employment rights and conditions, and further financialise and deregulate the economy in her plan to transform Brexit Britain into a tax haven and a billionaire’s playground. The number of those classed as “the working poor” is on the up, the use of foodbanks has skyrocketed, and the suicide rate continues to rise as benefits sanctions go on unabated. Call me crazy, but I can understand why an angry white guy from Stoke-on-Trent would side with right-wing YouTubers when they shed light on the “progressives’” uncompromising support for a university educated preoccupation with identity issues.

These “identity issues” – when they reflect objective social injustices – are important, but when they are the primary concern of the left and no longer solidary with the working class, the growing precariat, and the rest of the non-identitied oppressed they become peripheral and obscure to the struggle of ordinary working people. As a project of the left this is counterproductive. It does not protect those it purports to be defending; it merely aggravates resentment and further pushes the post-industrial ballast it has abandoned to the right. Who will that protect?

It's actually quite disturbing that a citizen availing themselves of the due process of law is regarded by a Tory M… twitter.com/i/web/status/8…

Stuart Campbell is being put through the wringer for having the audacity to use the law to protect himself and his reputation from Kezia Dugdale’s repeated slander that he is a homophobe. The unionists of Scotland and the tabloid media are losing their minds that he is doing this on top of fundraising to keep his pro-independence blog alive. He has every right to fundraise. In the past twelve months of daily blogging I have spent over 780 hours writing. That’s just over a month of non-stop work. It is a massive investment of time and energy. God only knows how much more time Campbell and the Wings team put in. Don’t muzzle the ox on the threshing floor.

Weaponising the accusation of homophobia against him – another example of throwing mud and hoping some will stick – is nothing but a cynical attempt to discredit him and thereby his work and that for which he and others are working. Kezia, the apparent leader of party political leftism in Scotland – knows the slur of homophobia will excite the eager-to-be offended and so trigger an overly emotional supportive response. It doesn’t matter a jot that Kezia is a lesbian. Being gay or lesbian gives no one the right to define what they merely do not like or find distasteful as homophobia.

Homophobia, like sexism, is real. Simply using common words and terminologies relating to homosexuality or LGBT people is not homophobic. Neither is the artistic use of nudity – male or female – as political comment inherently sexist. Of course they can be, but all of this is context dependent. Leaping to accusations of homophobia or sexism – especially when political agendas are involved – without reflection and a search for objectivity is just reductionist stupidity. It is harmful to the fight for equality, it weakens the left, and, in this case, it poses a serious danger to the unity of the independence movement. I am with Žižek on this: We ought to react less and think more.