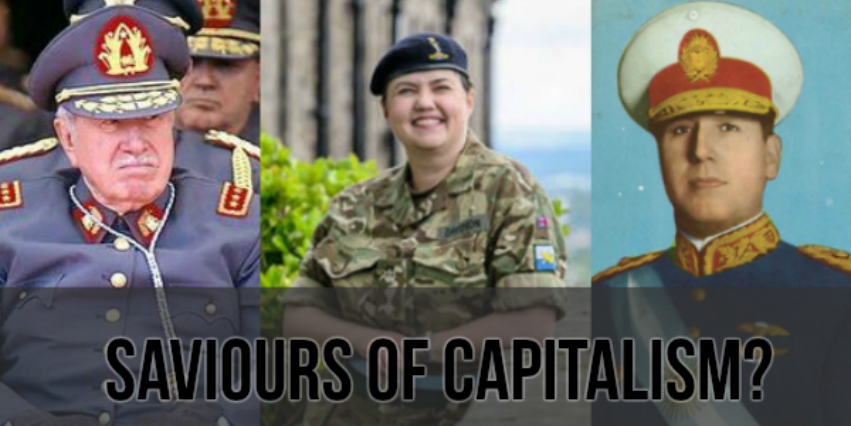 Credit where credit is due, Ruth Davidson, leader of the Scottish Conservative and Unionist Party, accepts that capitalism has gotten out of control. In a recent blog post on UnHerd she has suggested that while capitalism and the free market has lifted a billion people out of absolute poverty, it is not working for everyone. She posits the idea of capitalism as basically a good social and economic system that has been hacked for the benefit of the few, requiring remedial governmental intervention to close loopholes, address creeping cronyism, and save free market capitalism from an “unfree and anti-competitive capitalism.”

From Truthless Ruth to Colonel Gaddaftie. Some kind of promotion?

But rather than engage with real critiques of modern free market capitalism – or Thatcherite-Reaganite neoliberalism and the emergence of anarcho-capitalism – she merely asserts that the work of people like Thomas Picketty has been “disproved” on the back of the findings of the Brookings Institution. The reliability of this debunking of course falls flat on its face once we learn the Brookings Institution, located on Washington DC’s “Think Tank Row,” is funded by JPMorgan and Carlyle Group co-CEO David Rubenstein. The irony here, which we can surmise is entirely lost on Ruth, is that she is attempting to argue for a renaissance of the mythical good old days of capitalism while replying on the watchdogs of heartless neoliberalism.

According to her praise of good capitalism the progress of the free market has reduced inequality… from 1986. “The gini-coefficient might tell us,” pontificates Davidson, “that inequality in the UK has fallen to its lowest level since 1986.” This sounds super-fantastic until we take into account the fact that 1986 wasn’t exactly the heyday of economic justice in Thatcher’s Britain. She’s also wrong. We are 20 per cent less equal now than we were in 1986. The measure of real inequality in the UK has been rising steadily since 1978, when inequality was 68.6 per cent of what it is today. Ruth is on a flight of fancy. She’s certainly no economist.

So where is this good capitalism of hers and the free market lifting people out of poverty? It’s not in Scotland. Across the country last year the demand on foodbanks rose between 121 and 290 per cent, with a record number of families having been pushed into food poverty and homelessness due to the Westminster government’s austerity regime. Austerity itself, as Ruth would do well to note, is the result of the capitalist thinking of her Conservative Party in London.

Neoliberalism, the logical politico-economic consequence of capitalism, has really hurt our country. Ruth Davidson may not be aware of this. Her “Scotland” – Tory Scotland – is not a Scotland the majority of us recognise. The financialisation of London, a process that crippled industry in Scotland, was bankrolled with the revenue from the oil that was being pilfered from us. Ever since then, under various guises of capitalism, our stolen wealth has been used as a weapon against us, keeping Scotland in a state of perma-recession until we were given some small say in how we govern ourselves.

Since devolution more decisions have been made in Scotland, for Scotland, by Scots. Under the National Party the standard of living of the average Scot has risen, life expectancy has increased, standards in education have improved, and the economy has grown. All of this has been done against the tide of the Conservatives Party’s austerity agenda and with far less free marketeering than Ruth Davidson would dare to propose. Her Tories have never been in power in Scotland’s devolved parliament, so she can take none of the credit for the advances we have made. In Scotland “literacy is climbing,” as she says, but this was none of her doing and it certainly wasn’t the achievement of good capitalism.

Yet the single greatest problem with her entire article is the fact that she imagines she can fix a system she herself concedes is friar tucked by applying more of the same; modified or tweaked. The market will always be an important element of our national economy, but when government acts to ensure the interests of the wealthy take priority over the people of the nation – essentially the definition of British Conservativism – the result will always be the same; poverty and unnecessary inequality. No amount of cosmetic improvement or statistical manipulation will change this basic truth of neoliberal, free market capitalism. But, as we have said, Ruth is no economist.

Thomas Piketty: New thoughts on capital in the twenty-first century