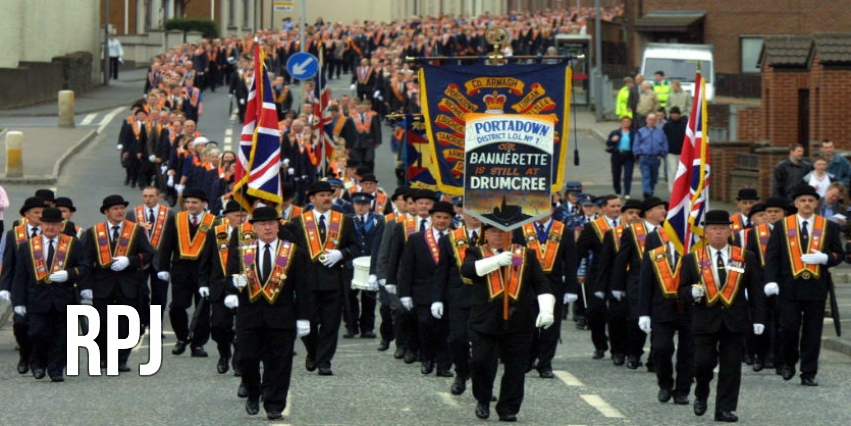 Britain is Telling Lies about Ulster

We are being led to believe that an otherwise innocent and somewhat naïve British state is doing a deal with the devil that is the Ulster loyalist DUP. The truth is that this is a whitewash of Britain’s role in Ireland. It is another lie.

England is in uproar over Theresa May’s decision to formalise a confidence and supply agreement with Northern Ireland’s Democratic Unionist Party, a political arrangement being presented to the British public as the Westminster government jumping into bed with terrorists. Nothing could further from the truth. There is no doubt, as state and police records verify, the DUP has a long history of association with Ulster loyalist paramilitary murder squads in Northern Ireland, but the narrative now being manufactured by the British establishment media would have us believe – quite wrongly – that the London government is entirely innocent of loyalist violence in Ireland.

It is difficult to believe now that, after over five decades of brutal violence and an uneasy peace, in early 1966 Northern Ireland had the lowest crime rate in the United Kingdom. It was a province at peace. It was governed by a supremacist Protestant unionist majority and the minority Catholic nationalist population was denied basic civil rights, but notwithstanding the obvious injustice and inequality Northern Ireland was not marked by unrest or violence.

In 1966 all of this began to change. It was the 50th anniversary year of the 1916 Easter Rising in Dublin, an event that led ultimately, through a war of independence and a bitter civil war, to the foundation of the Irish Free State – the later 26 county Republic of Ireland – and the partition of Ireland between the Free State and the 6 counties of British occupied Northern Ireland. Loyalists in the north in 1966 began to feel uneasy over the growth of the nationalist civil rights movement, seeing in it the hidden hand of a largely dormant IRA. Those accustomed to privilege, of course, see equality as oppression. As “defenders of Ulster” the Ulster Volunteer Force – founded in 1913 to stave off the rising tide of republicanism – started to take matters into its own hands.

Peter Ward was the first victim of the Troubles. A young barman out with his friends enjoying a pint, he was followed out onto the streets of Belfast and shot dead because he was from the Falls Road; an area of the city that identified him to his UVF murderers as a Catholic. As the trouble escalated over the next five years the British government quickly picked sides; as the nationalists’ political aspirations were perceived to be either the creation of a united Ireland or to challenge the unionist dominance of Northern Ireland they were identified as the enemy.

Then on 4 December 1971 the UVF detonated a bomb in a pub, killing 15 innocent people – including the owner’s wife and young daughter. Following a brief inquiry into the bombing the RUC and the British security services concluded that this was the result of a premature explosion of an IRA device awaiting delivery to its intended target. A later independent review found this to be a fabrication, exposing for the first time the reality of active collusion between the British Army and loyalist paramilitaries in the premeditated targeting and murder of innocent nationalists.

Behind all of this, whipping up the anti-Catholic sectarianism that led to the violence, were two men in particular; a young Presbyterian churchman Ian Paisley (later Lord Bannside) – the leader of the paramilitary Ulster Protestant Volunteers terrorist organisation – and Bill Craig, the leader of Vanguard – a hard-line sectarian loyalist umbrella organisation preaching that it was its “job to liquidate the [nationalist] enemy.” The Ulster Unionist First Minister of Northern Ireland, David Trimble (later Baron Trimble), was a follower of Craig and a fellow Vanguardist.

Theresa May is now inviting the DUP – the political wing of Ian Paisley’s UPV murder squad – into the heart of government, into the heart of the Brexit negotiations – the most important diplomatic repositioning of the United Kingdom in our generation. The BBC and the rest of the British establishment media are instructing us to be shocked. How can Britain – as though its hands are clean – do business with these murdering thugs?

Britain’s decision to include the DUP – its longstanding friends and confederates – in the government of the United Kingdom is far from a new political departure for Westminster into the murky world of terrorism and criminality. Theresa May is merely bringing into the open a long tradition of friendship and collaboration that has always existed between Britain as a violent and oppressive force in Ireland and its frontline political-paramilitary defenders of the Union in Northern Ireland, and it is time the record on this score was set straight.

Taoiseach Jack Lynch responds to Britain’s crimes in the North, 1969.

14 thoughts on “Britain is Telling Lies about Ulster”