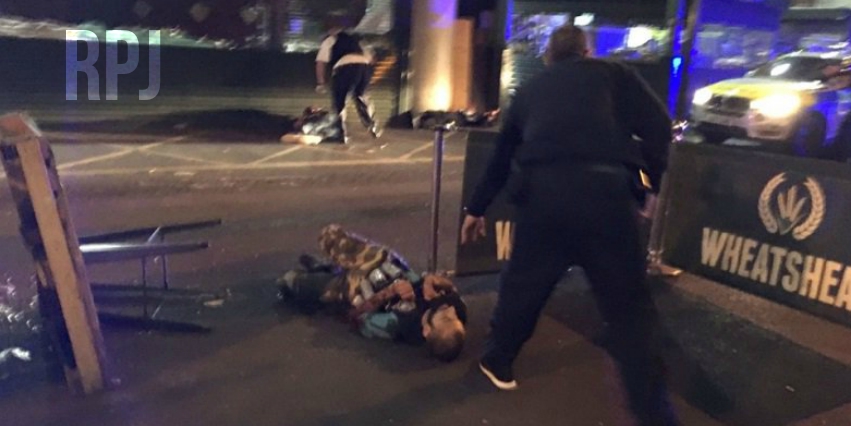 We are Funding the Terror

It is far too easy to scapegoat Islam and Muslims for the terrorism wreaking havoc on our streets. The media and the dog whistling from politicians are doing a good job of it though. Follow the money and you’ll see that we’re funding it.

“As Salaam Alaikum,” said the wonderful Sister Lorraine O’Connor, an Irish convert to Islam, as she greeted us to the Muslim Sisters of Éire interfaith Iftar meal in Dublin’s Hilton Hotel on Saturday night. As Salaam Alaikum, the Arabic words of peace – “Peace be with you.” Until after midnight we broke bread together, Muslims, Jews, and Christians; people of all faiths and none from all walks of Dublin life. By the time I had walked home my Twitter feed was telling me that another terror attack had taken place in London. Not two weeks since the atrocious bombing in Manchester, people were lying dead on the streets of London – again.

Peace? Diarmuid Martin, the Catholic Archbishop of Dublin, spoke during the Iftar meal – the communal meal at which Muslims break their Ramadan fast after sunset – about the “scandal” of homelessness in Dublin. He thanked the Muslim Sisters for the work they have been doing in the inner city. In the aftermath of Ireland’s economic collapse and in the midst of a homeless crisis Dublin Muslims have been in the city centre every Friday night feeding the hungry. That was where I first met Lorraine. I interviewed her on a bitter December night, and she told me what inspired her to be out in the cold with soup and rolls, tea and coffee, and warm food. “It’s because I am a human being,” she said as last-minute Christmas shoppers hurried past.

“Islam is not a religion of peace” the internet tells me. Surely this wasn’t the same Islam that welcomes a Christian bishop as an honoured guest; that sees in Dublin’s poorest the common humanity Allah teaches in its Holy Qur’an? ۞ “They give food, for the love of Him, to the needy, the orphan, the captive (Sūrat l-Insān 76:8).” No, this is Islam. This is the Islam I know from my Muslim neighbours and friends; the same Muslims, the same human beings who knock on the doors of my neighbourhood looking for non-perishable foods for their food drives for the poor in winter.

What about this other Islam; the Islam of the murderers, the Islam of barbarous terrorism, the Islam that has brought death and destruction to the streets of London and Manchester? Is this not also Islam? At the Iftar meal Julie Saddiqi, a London Muslim and interfaith activist, said of Salman Abedi’s actions in Manchester, “I don’t need to apologise for him. No one does.” She is right. She had nothing to do with what this young man did. No one did but him. He was “radicalised” like the terrorists responsible for the violence in London tonight were radicalised. It strikes me as reasonable to look into the radicalisation of these people for their motives – Islamic motives that have nothing whatsoever in common with the Islamic motives of the people who welcomed me and fed me tonight.

"Are our mosques hotbeds of terrorism? No. They are as ordinary and as chaotic as any other place of worship." Juli… twitter.com/i/web/status/8…

There was no Islamist terrorism in Britain before Britain’s illegal invasion of Iraq. It is worth bearing this in mind as we think about radicalisation. Part of Britain and the United States’ conquest and control of Iraq and Afghanistan and now Libya and Syria has been an escalation of their arms deals with Saudi Arabia, a state well-known for propagating militant Wahhabism – the Islam of al-Qaeda and Daesh. We know that the British government has been funding and training “rebels” and mercenary takfiri fighters from Libya, across North Africa through Iraq and Syria to Afghanistan. In fact we also know that Salman Abedi was one of these fighters, aided by the UK Home Office and the security services to travel to Libya to fight alongside al-Qaeda against Gadhafi.

Vanessa Beeley, a British journalist in Syria, has exposed the use of British tax-payers’ money in the funding of the “humanitarian” Syrian Civil Defence – the “White Helmets.” UKAID and USAID – fronts for MI6 and the CIA respectively – have pumped well over $100 million into this “humanitarian” outfit. Beeley and others, including the Canadian journalist Eva Bartlett and the French humanitarian Pierre Le Corf, have proven beyond all doubt the link between the White Helmets and al-Qaeda. It’s a Western-backed from for friendly terrorism, the latest development of Britain and the US’ humanitarian-military complex – “Smart Conflict.”

The only terrorism statistic anyone needs to know. Number of Islamic jihadist attacks on UK before Tony Blair's invasion of Iraq = zero.

One hundred million US dollars is a lot of money. It is also only the tip of the iceberg. Where did it come from? It came from the tax money paid by the mums and dads of the youngsters murdered at the Manchester Arena. It came from the tax paid by the victims in London this evening. That is atrocious. It seems callous of me to write. But it is true. This is the sort of money – when used to ignite insurgencies and to destabilise North African and Middle Eastern governments – that creates extremists. It radicalises and turns young men into “terrorists.”

So Islam is not a religion of peace? The mosque, as Julie Saddiqi reminded us this evening, is “as ordinary and as chaotic as any other place of worship.” Muslims, all 1.8 billion of them, are as likely to volunteer in homeless shelters and get involved in violent extremism as are Christians, Hindus, Jews, and atheists. They are human beings. What we have to be is smart. We have to look for the dots and the threads that link those dots together. Yes, we must hold the “terrorists” to account for their crimes. There must be justice for their victims. But what we cannot do is ignore the threads that link the clandestine activities of UK and US foreign intelligence serves to this mayhem. To do that would be stupid – because it’s costing lives, and we are paying for it.

WHITE HELMETS: LIVING NEXT DOOR TO AL QAEDA IN ALEPPO