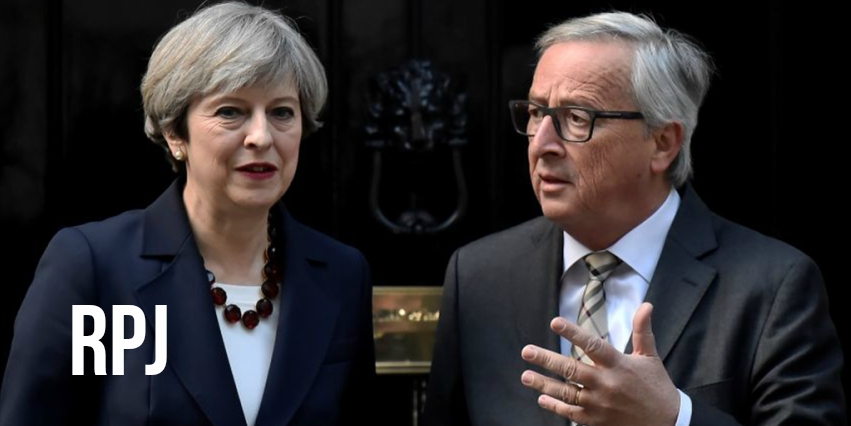 Theresa May dirtied her bid during dinner with Jean-Claude Juncker, the President of the European Commission, letting the whole of Europe know that she is all at sea when it comes to Brexit and the basics of using a knife and fork.

As far as the British media is concerned everything Brexit is running like clockwork. There’s nothing to worry about because we have Theresa May at the helm, gracing us all with her “strong and stable leadership.” In reality, of course, nothing could be further from the truth. Brexit, as the Germans and everyone else in Europe knows, is an unmitigated disaster. Germany’s Frankfurter Allgemeine Zeitung newspaper reported over the weekend on the utterly cringe-worthy performance of the British Prime Minister during her dinner with Jean-Claude Juncker and the EU Commission.

Its readers were treated to a presentation of a pathetic British premier who hasn’t the slightest notion what she is doing, and a Mr Juncker who was flabbergasted at how unprepared and out of touch Mrs May actually is. When she suggested that the UK could leave the European Union without paying its bills – because, as she said, there was nothing about settling accounts in the various treaties – Juncker promptly pointed out to her that the “EU was not a golf club.” It even needed to be explained to her at the table that after the conclusion of the Article 50 talks the UK will a third state, not even enjoying the same relations with the EU as Turkey.

Juncker’s conclusion, in response to May’s plea that everyone should be working together to make Brexit a success, was that Brexit cannot succeed. The impression that the European’s have is that London hopes to navigate this complex set of negotiations with slogans and political spin, and that the entire British side is being led by a clown. After an evening that was marked by one gaffe after another, we cannot blame the EU politicos for assuming this entire project is going to be a miserable failure, and that May herself lacks the wherewithal even to make a success of executing another British glorious failure.

16) "The more I hear, the more sceptical I become" said Juncker (this was only half way through the dinner)

This awkward dinner is being reported across Europe as the straw that has broken the camel’s back. EU negotiators are now more convinced than ever that the talks will break down, resulting in no closing deal being made between the UK and Europe – and this is no laughing matter. Other than May’s complete incompetence being a serious national embarrassment, a failure to reach a deal will have catastrophic and far-reaching consequences for the UK economy and for tens of thousands of people whose lives will be affected and changed as a result of this almost inevitable political fracture.

How the UK is Reporting this Dinner