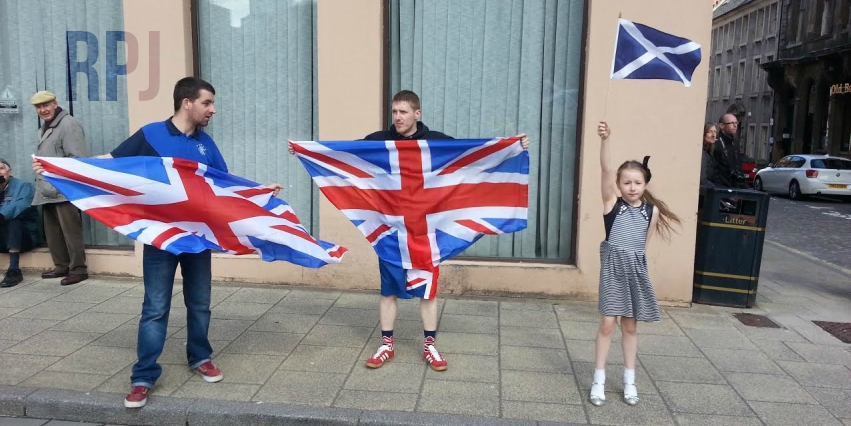 No Ideology without the Conflict of Ideology

Scottish nationalism is ideological, but it is only ideological insofar as it is a reaction to the domination of Scotland by another nationalistic ideology. These are similar ideologies in character, but profoundly different in nature.

Nationalism in Scotland, or – more correctly – the Scottish independence movement, has been subjected to the definition of its nature and characteristics by the British government and the state-aligned media Britain has at its behest. Britain, as the narrative creator, has presented Scottish nationalism to the British public and a global audience as a narrow, petty, and bigoted fascistic ideology, driven by hatred for England and the English. It has constructed the prism through which the Scottish constitutional debate is viewed and interpreted – both at home and abroad.

Scotland is by no means alone in this regard. Every separatist movement, seeking national autonomy from a foreign and dominant state, is, to a greater or lesser extent, subject to the propaganda of its imperialist-colonialist hegemonic master. Catalonia receives much the same treatment at the hands of the Madrid government, mitigated to some degree by the fact that Barcelona has a great deal more power over its own national media. It was the same for Ireland before it gained its independence.

This narrative, how the British state explains Scottish nationalism to the United Kingdom, presents a construct of the independence movement in Scotland as an ideology – implying a system of socio-political beliefs which are fundamentally and essentially anti-British. By dominating Scotland’s political discourse and setting the parameters of its understanding, the British state creates the illusion that it is ideologically neutral; that it is both the victim and the observer.

British neutrality in Scotland is a fiction; a chimera fabricated to distract the recipients of its propaganda from the full reality of its own dominating partisanship in Scotland. Scottish nationalism – our independence movement – simply would not exist in the absence of London rule. There is no ideology without conflict of ideology.

Our movement is a highly ideological social and political entity, but it is so only because it presupposes the highly ideological and imperialist-colonialist state polity that is Britain and the British state’s implied and applied ownership of Scotland. The ideologies of Scottish nationalism exist only in response to British ideology and the actuality of British domination. In this regard these two conflicting ideologies may be spoken of as similar – they are both nationalistic, but they are also different. As a reaction to British ideology, the ideology of Scottish nationalism and the rational basis for Scottish independence would make no sense if it was, in nature, indistinguishable from the dominant British ideology.

Any effort to understand Scottish nationalism in its own terms necessitates an understanding of British state ideology, but pinning this down also proves to be quite difficult. At its core Britain is unionist; at once royalist, imperialist, loyalist, colonial-expansionist, and militaristically arrogant. Yet without venturing to the Gaelic fringe of its “home countries” qua nearest foreign possessions, Britain has a nearer atmosphere around its ideological nucleus – the sometimes equally dominated England(s).

This malleable and fluid lesser Britishness too has its own British ideologies, without the accommodation and consent of which the core is stifled. It is in a sense true to say, then, that it is this wider social and political Britishness of Britain’s England(s) that empowers Britain’s core ideology and gives it traction. But these ideologies – these inner British ideologies – are not the same. They exist in tension with one another in an arrangement where the core preserves national dominance by negotiation with the inner peripheral Britishness of its dominated England(s).

The ideologies of this – the albumen of the British egg – are, owing to the ever changing social and class dynamics of its various constitutions, transient and shifting over time due to changing regional, historical, and socio-political pressures. At the present we can gain some insight into where these ideologies are situated – akin to a sociological version of Heisenberg’s uncertainty principle – due to the expressions that have come to the surface as a consequence of the politics of Brexit.

“Large sections of the English white working class are acting out supremacist and imperialist status frustrations.”

We have seen that large sections of the English white working class are acting out supremacist and imperialist status frustrations. Undergirding Britishness there exists a deep seated cultural belief in English exceptionalism, that the essential quality of England and the Englishman it to share in the imperialist-colonialist mastery over others with the ideological core of the British state. This fraction of the population is angry that it no longer rules the world. It is yet to realise it never did.

As this process of awakening continues, this population – an insuperable social and political force – is venting these frustrations on “traitors” and those outsiders who are to it the proof of their cultural and nationalistic emasculation – “foreigners” and Muslims in particular. Britain’s core ideology is impotent without the support of this inner periphery, and so has accommodated itself to a significant degree to the prevailing racist ideologies of its nearest English dominions. Britishness, at this moment in time, is an ideology mobilised around extremely powerful and toxic frustrations, anxieties, and racisms – principally Islamophobia.

It would be wrong to imagine that the nationalism of Scotland is incapable of descending into this or something similar. Scotland is not immune to racism and intolerance. At this moment in time the nationalism of Scotland, of the Scottish independence movement, has coalesced as a reaction against the core of British state ideology and so has developed a radically different nature to that of Britain and Britishness. Scottish nationalism has become civic; building cross community alliances as Scottishness in resistance to the dominating imperialist-colonialist and racist ideology of Britain. Much the same has happened within Irish nationalism, where racism and xenophobia have been kept in check by the central republican force of Sinn Féin and its activists.

Yet this is only the reality of the present. It offers no guarantees for the future. In the event of the defeat of the Scottish independence movement, Scotland too has the potential to succumb to the angry and defeated frustration of Britain’s England(s). This is by no means the only route Scotland can follow. There is nothing deterministic about it. But, given the right – or better, the wrong – circumstances, a defeated Scottish nationalism may also look for scapegoats. Perhaps the only real safeguard against this happening in Scotland is the victory of the independence movement.