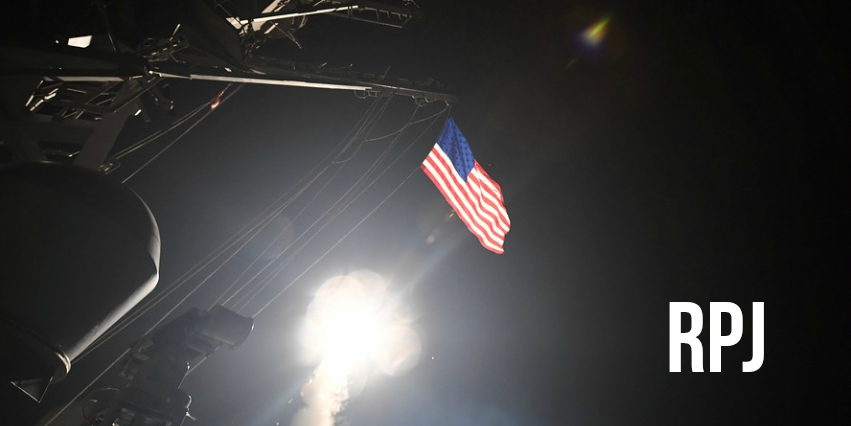 Has the US invented a Chemical Weapons Attack?

President Trump has ordered an attack on an airbase in Syria in response to an apparent sarin gas attack in Idlib province. However, the stricken airfield is a Russian base of strategic importance and Moscow is not taking this well.

Early on Tuesday social media in the Syrian province of Idlib began to report a gas attack, describing how planes were seen and heard dropping shells on civilian targets. As the day progressed it became obvious the province’s few functioning hospitals were not able to cope with the numbers of those injured. In what was quickly determined to be a sarin gas attack, over 70 people were killed and hundreds seriously injured – children were among the dead and wounded. International outrage was immediate.

In both the United States and the United Kingdom the incident was described as a war crime and the finger of blame was again pointed at President Bashar al Assad. During trade negotiations with Chinese premier Xi Jinping at Mar-a-Lago in Palm Beach, Florida, President Trump order retaliatory action. According to the Pentagon, in what was described as a “legal proportional strike,” naval destroyers USS Porter and USS Ross launched a combined tomahawk missile assault on Shayrat airbase near Homs from locations in the eastern Mediterranean. Despite the Trump administration alerting Russia – which had personnel at the airbase – before Congress, the attack now raises the possibility of a direct military confrontation between Russia and the United States in Syria.

Assad is about to defeat ISIS, so why would he suddenly gas women & children to infuriate America? Makes no sense. @realDonaldTrump

As these events bring us closer to war between the US and Russia, the narrative of another Syrian chemical attack on civilians is problematic to say the least. Why would Assad risk provoking direct US intervention only days after the US ambassador to the United Nations stated that US policy was no longer directed towards removing him from power? Former Pentagon prosecutor, Sen. Richard Black, asked – in an interview with Russia Today – why would Assad “snatch defeat from the jaws of victory?” Indeed. Syrian government forced have all but defeated ISIS and US-backed al-Qaeda militants in the north, putting the government within a stone’s throw of ending the war.

Black – the Senator for Virginia – pointed to the questionable reliability of the witnesses, the White Helmets – who he describes as “terrorists” and “an arm of al-Qaeda.” The sexed up nature of the dossier against Assad doesn’t end here. In 2013 a sarin attack in Damascus almost triggered an international intervention, to avoid which the Syrian government surrendered its entire stockpile of chemical and biological weapons. Later the same year Turkish authorities intercepted al-Qaeda agents attempting to cross into Syria with sarin gas and the chemical components needed to produce it. Even the UN confirmed that munitions captured from “rebel militants” contained sarin.

Without any real investigation into the attack in Idlib, it would appear to be the case the Trump administration has leapt upon this incident as a pretext for military involvement. Russia – allied with Syria – has responded by cancelling its agreement with the US to avoid engagements with US forces in the country, a step that does bring us closer to a widening of the conflict. The UK has said that it fully supports the actions taken by the United States, thus indicating that it may be prepared to commit ground troops to the US-led coalition in the event that Russia refuses to back down.

All of this – from beginning to end – smacks of fake news. The photographic evidence for the sarin attack has been called into question by independent experts who have pointed out the absence of the protective clothing required to deal with such a deadly neurotoxin – lethal even at very low concentrations. International monitors doubt that Assad has such an arsenal, and we know that the rebels do. Yet without waiting for an investigation the US has upped the ante, creating all the conditions necessary for a more serious global conflict that will undoubtedly involve Britain. The only thing that is clear is that the news is the last place we will get reliable information.