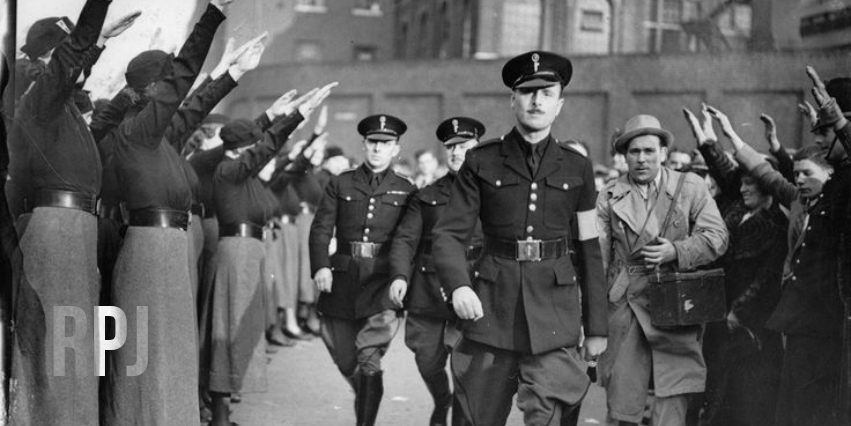 We can’t compare Nigel Farage and Donald Trump to the fascists of 1930s Europe, we are told, because they aren’t putting people in gas chambers. It is a mistake to think that fascism and the Nazi genocide began with murder. It began like this.

When the media and the current political establishment talk about the “rise of the populist right” what they are really saying is that fascism is making a comeback. Indeed it is, but those on the right understandably don’t appreciate being called fascists. No one wants to be associated with the memory of Mussolini and Hitler or any of those across Europe in the 30s and 40s responsible for civil and political repression, despotic barbarism, and wholesale genocide. Comparisons made between Trump, Farage, Le Pen, Wilders, or any other right and far-right figures and these nightmarish figures of European history are immediately countered with the charge of breaking Godwin’s law; that the first person to mention Hitler or the Nazis loses the argument.

@MikeLevinCA US media must get over their aversion to Godwin's law. Trump is using Mein Kampf to govern. https://t.co/UA8oQATIub

Okay, making an analogy to the Gestapo when frustrated with the bureaucracy of the social welfare system – as tempting as this often is – well deserves to be called out for the baloney that it is, but this defence comes apart when we are discussing political beliefs and state policies that target immigrants, refugees, and other vulnerable religious or social communities in order to gain popular support. Of course the far-right – now masquerading as the so-called “alt-right” – will remind us that calling for caps to be placed on immigration and border walls is not the same as rounding Jews, homosexuals, communists, and gypsies up into concentration camps and murdering those deemed “undesirable” by the régime. They are correct, but neither fascism nor Nazism began with death camps.

Donald Trump and Nigel Farage are not Adolf Hitler and Benito Mussolini, but that is not to say that their right-wing demagoguery can’t and won’t lead us to the same horrific places. They can and, if left unchecked, they will. Many of the political and social defences to fascism that we developed during and after the Second World War have been weakened. The “Never Again” slogan of Holocaust memorial organisations has lost much of its power due to the overuse of the Holocaust and its weaponisation by the State of Israel and its defenders for their own aggressive, expansionistic, and illegal agendas. It is for this reason that I, personally, have abandoned the use of the term “the Holocaust” in favour of “the Nazi genocide.”

Other things too are acting to weaken our ability to resist the rise of modern fascism. The complex social and political developments – economic austerity, rising unemployment, deepening levels of poverty and so on – that have made a resurgence of far-right sentiment possible are polarising public opinion in other directions which are also threatening the security of those presently in power. Mainstream politicians are thus fighting mounting agitation on both the right and the left of the political spectrum, and their ad hoc solution has been to lump this accumulative demand for change into one demonised category – “populism.”

It is for this reason that the Westminster establishment in the United Kingdom is able to tar Momentum, Plaid Cymru, the SNP, UKIP, and Britain First with the same brush. Scottish and Welsh nationalists are presented to the wider British public as positions synonymous with British and white nationalism with all their racial supremacist overtones. State broadcasters the likes of the BBC, as instruments of government power, need not pay attention to proper analysis or nuance; certainly not when the battlefield is one on which the state itself is fighting for its very existence. Yet this deployment of “alternative facts” and “fake news” is transparent in the age of the internet, ultimately undermining the credibility of the state and its propaganda machinery. The right merely points to this dishonesty and in so doing protects itself from valid criticism.

In the meantime – as we have all now seen – racism, Islamophobia, xenophobia, bigotry, and a whole host of other prejudices are normalised in the media and political discourse. With the state no longer received as an honest broker in the national discussion the most shameful rhetoric is unleashed under the banner of freedom of speech, and all efforts to shut it down are increasing becoming accepted as forms of censorship; political correctness, thought control, and cultural Marxism. The result is that the right – with all its fascistic aspirations – wins. Ordinary people who have suffered and are continuing to suffer from the greatest economic depression since the Great Depression – the same economic collapse that set the stage for the rise of the Nazis – turn in larger numbers to those who are willing to put real British people first – to make the country “great again.”

The worst mistake that we can make is to assume that the population in general has enough common sense to see the dangers inherent in this trend. Common sense is, and always has been, the least common of the public senses. People will always vote in selfish self-interest, and they will do this more so in desperate times – and these are desperate times.  Austerity has meant that more people are out of work, more of those still working are working under poorer conditions, the cost of living is rising, incomes are falling, and more people are depending on an infamously dehumanising welfare system. With so many people – the growing precariat – feeling so vulnerable and powerless, it only stands to reason that they use their votes to fight back. The right is letting them know that it is fighting for them, and it matters not a jot that this is a lie.

This is how fascism begins. It begins with massive swathes of the population reduced to desperation, robbed of any real political representation by an establishment that gets fatter and fatter from the benefits of their social and political position. Once we add to this a political expression that has freed itself from the normal rules of decency and restraints; one that is willing to offer easy, authoritarian solutions and identify weak scapegoats that permit the frustrated masses to vent their own latent prejudices, then we have a force that liberal democracy finds almost impossible to stop. When in power, as we have seen with Hitler and Donald Trump, this movement maintains power by continuing to use its winning formula and then violence. This is how fascism begins.