Voyage from one Baby to Another

George the Georgian and his wife Gvanci (also a Georgian as it happens) live two houses down from me. Christmas in Ireland still confuses them. They are Georgian Orthodox and celebrate Christmas on the 7 January. Yet they were delighted when I dropped in on them with a set of baby clothes for their brand new son, Nicholas (a name I have presumed is the Georgian equivalent of Irish Christmas babies getting lumbered with Noel or Noelle). Zuka, their other son who is in the throes of that developmental crisis known to every parent as the terrible twos, got a selection box. He tore this open immediately and sent Maltesers flying all over the room – exactly what I would have done if there were no rules.

George the Georgian and his wife, my neighbours, have been delivered of a healthy baby boy. Let the screaming begin. Great news.

George and Gvanci came to Ireland during the Georgian civil war. They met one another in Athlone of all places and have together made Dublin their home. Both of them, like me, are migrants and, also like me, outsiders in the inner city. Zuka loves dogs, and by that I mean George loves dogs, and so last year they bought a puppy but found they didn’t have the time to care for it and were forced to make the tough decision to give it up. As sad as this is, it has an upside. When they are able they like to dog-sit Ambrose (they are very brave people).

Later in the day, after braving Storm Barbara – or “Babs” as I call her – to get to my salubrious Christmas destination, and after washing down six rooms of metal crate shelves and making way for a feast, I had a chance meeting with an old friend from another life – a priest in the remotest part of this side of the world. Knowing that I would be far too late to celebrate midnight Mass I called ahead to the presbytery and asked the voice over the phone if I could come late and have a quiet moment. When at last I met the voice in person it was none other than Gerry, the priest who showed me the ropes in hospital chaplaincy and who minded my home parish after my childhood parish priest passed away. His solution was to give me a set of keys and offer me some “liquid refreshments” when my work was done.

Six of us ended up in the church after hours. Our liturgy was simple and hastily planned – like a badly done bank job – we’d sing some carols (hilariously grotesquely might I add), read the readings, make up some prayers on the hoof, be quiet for a while, and instead of a sermon we’d all tell our own Christmas story. It wasn’t Mass. It wasn’t the work of a minster choir. But it was perfect. During our story time sermon I told of how I had followed a star and brought a gift to a newborn baby, and it was then the magic began to happen.

Right in front of us was the crib and as I told my tale I was looking at another new baby, wrapped in swaddling clothes and lit by candles. In that manger I saw Nicholas, picked up the new baby smell and I remembered – really remembered – what this story was all about. A mum and dad, my mum and dad, your mum and dad, or anyone blessed with a wee bairn – shining, new, smelly, glorious. In a cattle shed: Migrants, refugees, Travellers, homeless, housed – it doesn’t matter. Everything that matters; every hope and dream, our futures, our universes, our pride and joy, is stirring in that cradle. Shepherds and kings and angels are brought to their knees, and so are we. Happy Christmas Nicholas! Happy Christmas all. 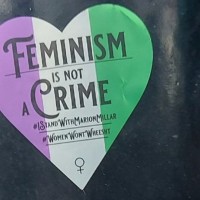