Renting in Dublin and the Failure of Law

Renting somewhere to live in Ireland is a dangerous, even life-threatening, business. Ireland’s lawmakers are landlords and so write laws to suit their own interests to the serious harm of ordinary working people looking for somewhere to call home.

It’s no great mystery that the flimsy legislation around the rental of private accommodation and the wonton greed of Irish landlords play a massive part in a housing crisis that has lasted in Dublin for more than a century. Laws that favour the rights of property owners over and above the rights of tenants to have a home have conspired over the past hundred years to push up both the rental prices and the homeless statistics, and not one Irish government has ever lifted a finger to remedy the situation. The reason for this, of course, is that the TDs – the elected representatives of the country – represent the property owners – and this is because they themselves are landlords.

With one in five TDs in the current Dáil being owners of private rental accommodation it is no wonder that nothing has been done – even as homelessness in the country reaches record levels – to help keep ordinary working families in their homes. In recent years, in response to mounting public pressure, the government has made certain adjustments to the rental laws. Rather than actually legislating for the protection of renters it merely doubled the period between which landlords could raise the rent from 12 months to 24 months. Sounds good, but this has resulted in mayhem. As the law will not come into effect until the end of the year it has simply motivated landlords to enact rent hikes before the New Year, putting more pressure on tenants.

As with everything pertaining to the law in this country there is even a way round this for landlords who have found themselves unable to jack up the rent because they have already done it in the preceding year. If their property happens to require “repairs” notice can be given – legally – for the current occupants to pack up their stuff and sling their hooks. After a lick of paint and maybe some other pointless cosmetic “improvements” the house can be put back on the market at an insanely inflated price. Marianne Hutchinson is the 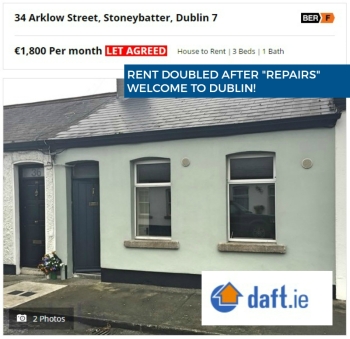 owner of a three bedroom bungalow in Stoneybatter, Dublin; a quiet section of the north inner city that is presently enjoying the experience of urban gentrification. Lucky Marianne! Landlords can rub their hands and ask for a little more.

Problem was the poor sot had already shaken down her tenants that year. Not to worry; she had been getting emails from them for years begging that something – alas anything – be done about the damp. Now she could leap in to the rescue and fix the rot. She sent the two who were living there notice to vacate the premises as there were “extensive repairs” to be done. Graham Farrington Christie, her property manager from Haden Properties, Fitzwilliam Square, then set about the business of frequently “reminding” the tenants to get on their way. By all accounts this is how it is done in Dublin.

Once the repairs were completed the property was back up on the letting site Daft.ie, but it had doubled in price. Lucky Marianne! We will add here that Marianne is not alone. This is standard practice in Ireland, and so it explains a great deal about the basket case nature of the national economy. These people are the laughing stock of Europe. They don’t care – they are making money hand over fist, and, what’s more, what they are doing is perfectly legal and above board. Marianne and all but the most stupid of landlords are decent law-abiding citizens. Ireland has never ratified the right of persons to adequate accommodation, and why should it when this is a nation wherein it pays to put people on the street?