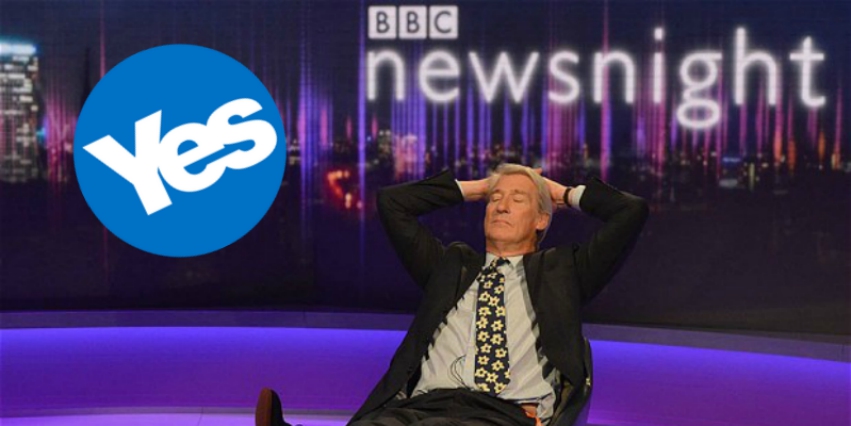 We Mustn’t Believe a Single Word They Say

Jeremy Paxman arrives in Ireland to spill the beans on how, after portraying Scottish independence as Anglophobia, he would have voted Yes. On reflection it would appear to be the case we were never listening to Paxo at all, but to the voice of the BBC.

One of my very favourite games on Twitter is “disease of the week.” Allow me to explain. Ireland is a gifted little nation. All over the world Irish performers, writers, artists, and musicians are celebrated for their wit and genius, and yet Ireland is a nation, like my native Scotland, that routinely expels its brightest and its best. If you take the time to think of an Irish superstar the chances are they live in England or in the United States. James Joyce’s Ulysses – arguably the finest work of fiction ever produced, was effectively banned for decades. Much the same continues today, resulting in weekend television viewing that is nothing less than accidental comedy. It is appallingly boring. The highlight is of course the Late Late Show. While our neighbours over the water are rolling about the floor at the antics of Graham Norton, we’re stuck with Ryan Tubridy and a new heart-rending interview with the family of some poor soul with a rare genetic disorder every week. Irish Twitter has branded this hashtag disease of the week.

Jeremy Paxman just said he would have voted for Scottish independence if he had a vote in 2014 #IndyRef on @RTEOne. @JeremyPaxman

Earlier tonight the disease was clinical depression and it was no less a person than Jeremy Paxman on the hot seat. These diseases are serious business, but – seriously – not for Friday night down time. Once Paxman spilled the beans on his hard time of it with the auld depression and his time with a good therapist he moved onto politics. Again, not great choice for the start of the weekend, but – as we have said – this is Ireland. Paxman irritates me to be quite honest, and so the last time I paid him a blind bit of attention was during the 2014 Scottish independence campaign. Not only was “Paxo” a firm propagator of the bullshit that Scotland was too wee, too poor, and too stupid for independence, he was also the BBC’s locomotive pushing the idea that we wanted independence because we hated the English. Paxman was a big gun of the Better Together campaign.

That was over two years ago, but listening to him on the Late Late Show I noticed he was singing another tune altogether. It was interesting that this interview wasn’t happening in London, because Paxman was all in favour of Scottish independence. Apparently, according to him, he had been all along. He didn’t think we would leave the union, and in this he was right – no thanks to him – but he added that that wasn’t how he, had he had a vote, would have voted. In that instant the focus shifted from his depression to mine. The slimy beggar!

Okay, this was informative. It reminded me that these talking heads on British television aren’t to be trusted – he was never paid to give his own opinion. These people are tools. They leave their integrity at the door and go on air with a message. Sure, it was Paxo’s voice, but the words were always coming directly from the mouth of Aunty Beeb. At the time of that referendum – as is still pretty much the case – the BBC agenda, over all the papers and television stations, was the official line, and the unionist fearmongering that it was spouting was always a lie. Years of familiar faces and voices had brought the public to trust these personalities, but this was the true deception; they were never – like Jeremy Paxman – authentic personalities. They were non persons pulling the wool over our eyes. This is a realisation that has me wondering if one of the side effects of being this inauthentic Paxmanesque non person for an entire career is clinical depression. That could be a new disease of the week.