That Awkward Moment When… Naomi Klein

Follow @RPJblog
“Still on for Naomi Klein tomorrow night, aye?” asks John over Facebook. “Can’t, couldn’t get a ticket!” I replied. “I got you one sure you Muppet!” “DID YOU? Then I can make it! How much does I owe you, you legend.” Thus began our wee adventure down to the RDS in Ballsbridge to listen to Naomi Klein on the impending political and environmental emergency that is climate change. Speaking to a sold-out venue of perhaps a thousand, five hundred Dubliners (including my cousin Eoin who I failed on two separate jaunts to the toilet to make eye contact with), Klein spelled out the terrifying reality of the present political inertia, and the pointlessness of the self-congratulatory Paris Summit.

It goes without saying that her address, like every one of her YouTube clips, was utterly captivating. What was equally captivating, but for completely different reasons, was the In Conversation part of the evening, hosted by Áine Lawlor – RTÉ journalist and broadcaster, famous for such classics as Big Week on the Farm. Looking on as Lawlor scrolled down her tablet screen, where no doubt the real brains of the operation was feeding her questions and witticisms, the true parochialism of the Donnybrook Set was exposed. While Klein interrogated the window of opportunity afforded to renewables with the low ebb in oil prices, the best Lawlor could come up with was: “Why kick oil when it’s down?”

It got worse. Throughout her presentation Klein reminded us repeatedly of the inspiration that our own Right2Water campaign has been to similar anti-capitalist movements around the globe; an issue on which RTÉ took a very definite – and hostile – position. So, with all the grinning and fraudulent praise for this icon of the left, Áine certainly wasn’t going to entertain anything about the water charges in the conversation, and she did try her best… until question time. Some woman down the front was brazen enough to get on her feet with one of the roving mics and make this same point in front of everyone. Lawlor’s cool snapped, and in the most embarrassing way – for Ireland – roared the young woman down, saying that she would put no such question to Naomi. 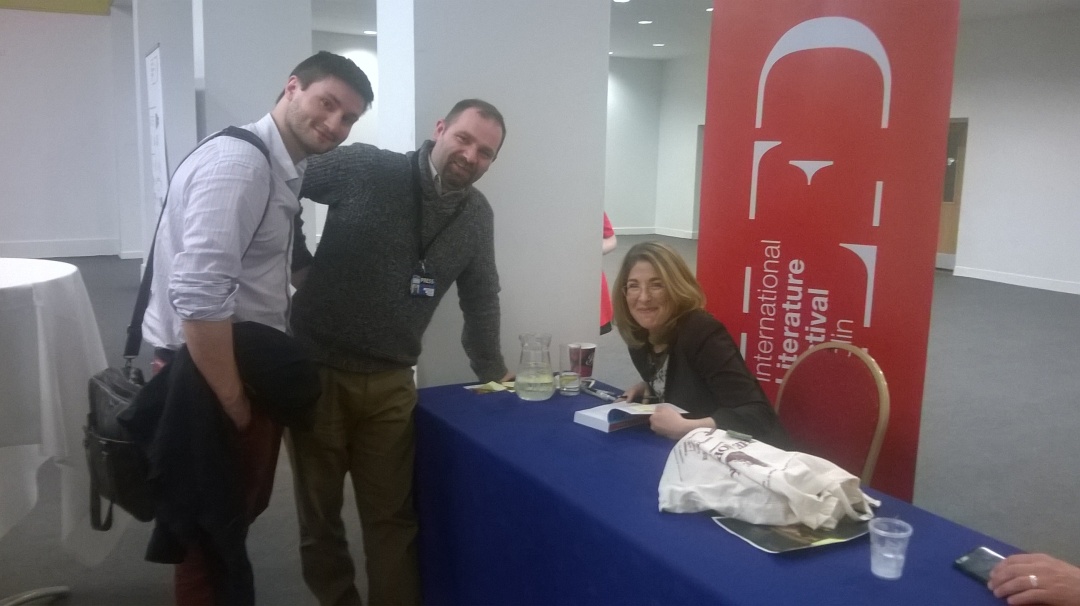 This is exactly the problem with this level of national hypocrisy; on the one hand there is the need to flatter the stars, even when those stars are the epitome of everything this neoliberal state both fears and loathes – giants like Naomi Klein and Noam Chomsky, then on the other there is this cringe-worthy attempt to silence and stifle the replication of their big ideas. In the end the question wasn’t asked, and being cordial Klein never addressed it – but it was answered. Klein’s praise for Right2Water and the applause to the question drove Lawlor and her RTÉ out like a sore thumb. She never waited long after the end, and wasn’t to be seen anywhere backstage. Naomi was, and that’s what mattered.

This Changes Everything | Trailer

One thought on “That Awkward Moment When… Naomi Klein”