Right-Wing Politics are a Serious Threat to Europe

Follow @RPJblog
On 6 February an affiliate of the German far-right Patriotische Europäer gegen die Islamisierung des Abendlandes (PEGIDA Party) is to be launched at a rally in Dublin to coincide with a day of anti-Islamic action across Europe. Peter O’Loughlin of the openly racist and anti-Islamic group Identity Ireland has met with the founder and former leader of the English Defence League, Tommy Robinson, to formally extend PEGIDA’s influence from England to Ireland, bringing a number of often violent racist movements in Europe under a common banner. While in Ireland, other than the unfortunate misunderstanding between Fr. Ted and the Chinese residents of Craggy Island, hardcore racism remains a minority sport in Ireland, but the arrival of a continental current of Neo-Nazism at a time of economic austerity and a global refugee crisis can bring nothing good.

@TRobinsonNewEra Thanks for coming Tommy on Saturday.The first of many guests Identity Ireland, ''real nationalist'' will host in Ireland

Europe's Rape Epidemic: Western Women Will Be Sacrificed at the Altar of Mass Migration pegidauk.org/v1/news/28-eur… https://t.co/05S3ajRGGH

According to the prevailing rightist narrative anti-Islamic opinion and political activism is not racist because Islam “is not a race.” The fact that the overwhelming majority of the world’s Muslims are Middle Eastern, Asian, and North African, we are to believe, is just an unhappy coincidence. Islamophobia, or anti-Muslim racism, is racism and attempts to disguise this behind fantastic exaggerations of an Islamic take-over of Europe and the imposition of the far-right’s poor understanding of Sharia law are weak and transparent. As support for racist movements in Europe is on the rise the people of Ireland must be prepared to see this for what it is and resist it.

In a study conducted by James Carr of the University of Limerick, Experiences of Anti-Muslim Racism in Ireland (2014), one third of Muslim respondents said that they had been the subject of violence and intimidation because they had been identified as Muslims. Irresponsible tabloid reports of ISIS sympathisers and ‘Jihadi clerics’ living in the country, coupled with an international climate of fear, has given implicit permission for the victimisation of vulnerable groups in our country. Hate crime is famously underreported by both the victims and in the media. 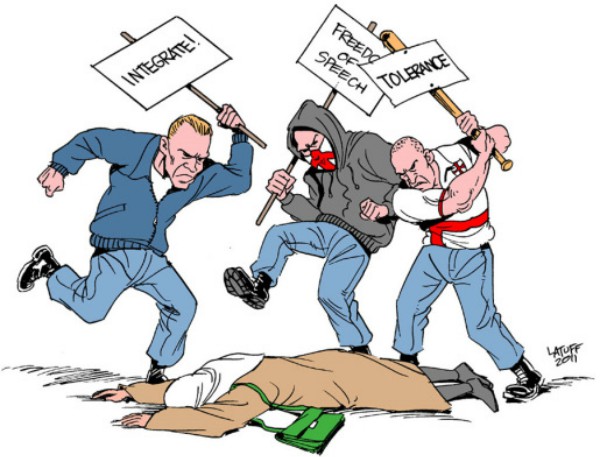 Under normal circumstances racism and hate crime can be dealt with by a healthy society by recourse to the police and the legal system. The problem that we have in the present moment is that these are extraordinary times. Politicians and governments, spurred on by populist politics and the US and British led global war for resources being fought in the Islamic World, are accelerating to the right. Western media has manufactured consent for this war by frightening and confusing the public. This is not a ‘storm in a teacup.’ If this is not checked, sooner or later events will overtake our countries’ ability to restore calm. We are now living in a tinderbox and any provocation can turn out to be the proverbial straw that breaks the camel’s back.